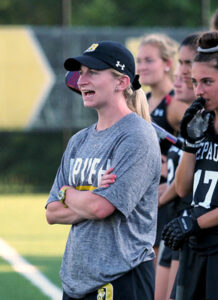 Hopkinton native and former Hillers field hockey standout Tamara Mills has been tapped to become the next head coach of the Sage Colleges field hockey team, and she is looking to build the program in Albany, New York, into a competitor.

“I’m wicked excited and feel grateful for this opportunity,” Mills said. “To be able to grow a program has always been a goal of mine. On top of that being a couple hours from home is priceless to me, especially since I have been away since college.”

Mills was a four-year varsity starter at Hopkinton High School, helping the team to the 2008 state championship and four Tri-Valley League titles during her career. Mills was a three time TVL All-Star and earned team captain and MVP recognition during her time with the Hillers.

Mills went on to Franklin and Marshall College in Lancaster, Pennsylvania, winning 70 games and advancing to a pair of sweet 16 appearances in the NCAA Division 3 tournament. A midfielder, she scored 31 career points and had three game-winning goals in her 63 collegiate games. Before landing at Sage, Mills spent time as an assistant coach at DePauw University in Greencastle, Indiana.

In the short term, Mills said she wants to get to know her team, which completed its first season last fall. Ultimately, she wants to build Sage into a competitive team, both within the Empire 8 Conference and in Division 3. She also wants to make an impact on her players off the field.

“I hope to encourage young women to pursue their dreams by fostering an atmosphere where they become the best versions of themselves,” Mills said. “I hope my positive energy, drive and competitiveness will bring the potential out of Sage.”

Mills describes herself as a “student-athlete oriented” coach and “more of a cheerleader than a yeller.” That said, she does set a high bar of expectation for herself and her players.

“I like things to be done well and in the right way, so I do have high standards and expectations,” she said.

In addition to coaching, Mills has been active in the athletic departments in which she has worked. She worked with the Student Athlete Advisory Committee at DePauw and helped oversee and develop the school’s strength and conditioning programs. As a graduate student at McDaniel College, she served as the field hockey team’s interim head coach and earned a master’s in kinesiology.

She said her love of athletics was forged even before she donned a Hopkinton High uniform. Mills was 7 years old and waiting for her brother to get out of football practice when she saw the HHS athletic director and her mother explained to her what an AD does.

“According to legend I responded with, ‘You mean he gets paid to organize sports?’” Mills said. “Since then I realized my passion for athletics could also be a career.”

Though just beginning, that career has already taken a number of twists and turns, as is common in the world of college sports. Mills said her family has been with her through every step, including the latest one that brings her closer to home.

“My family has always been my number one fans,” she said. “They were always on the 50-yard line when I was competing and that has not changed. In a profession where things change on a dime regularly, I have come to appreciate their constant support even more. Nothing beats having my family on the 50.”