Lung cancer kills more people than any other cancer. Nearly a quarter of all cancer deaths are caused by lung cancer.

A major reason for this sobering statistic: By the time patients experience symptoms such as coughing up blood or chronic coughing, the disease often has reached an advanced stage that can be more difficult to treat.

But there is a way at-risk individuals can improve their chances. Screening for lung cancer is one of the most effective ways to reduce lung cancer mortality, according to the American Cancer Society.

However, only 4 percent of those at high risk get screened. 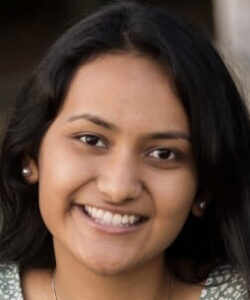 She is a member of the American Lung Cancer Screening Initiative, which promotes lung cancer screening for those at high risk of developing lung cancer.

Her involvement was inspired by a family history of cancer, with “not the best prognosis,” she said. Her experiences have made her “very passionate about cancer and spreading the word about cancer.”

In an effort to reduce these numbers, Puttaraju is working to make people aware of the availability and importance of screening, particularly in November, which is National Lung Cancer Awareness Month.

Screening is available to people who are between the ages of 55-80, who have smoked the equivalent of a pack of cigarettes a day for 30 years and currently smoke, or who have quit smoking within the past 15 years.

Members of the initiative encourage people who fall into this category to discuss the issue with their primary care physician.

She encouraged smokers to be honest with themselves about the need for screening.

A “stigma” around smoking sometimes holds people back from considering screening. “People don’t want to admit to themselves how much they smoke,” she said.

At other times, she said, “people underestimate how much they smoke. It’s up to the patient to come to terms with how much they’re smoking.”

But screening can save lives. “Early detection almost always guarantees a better outcome and a better prognosis,” she said.

If a screen shows early signs of lung cancer, doctors can treat it at a stage when the prognosis is generally more promising, and before the cancer “has spread from its primary location” and become potentially more lethal, Puttaraju said.

Some people will receive clear screens. While this is welcome news for sure, it should not serve as an alternative to quitting smoking.

Not matter what the outcome, Puttaraju said, “consider quitting even if you have a clear screen.”