HHS graduation car parade gets tentative approval from Select Board 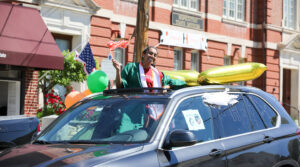 The Hopkinton High School rolling car parade for graduating students, scheduled for June 4, was unanimously approved by the Select Board at Tuesday’s meeting, but with the understanding that class representatives must work with town departments that expressed safety concerns and get their approval.

“We’ve had this parade for the past two years,” HHS Senior Class President Manoli Barris told the board. “It’s brought a lot of spirit to the classes before us. During the years of COVID, finding class unity during this time is really tough. So the parade has been found to increase that. It’s been a really fun event that a lot of the town has been able to bond around and rally around.”

Added Sarah Furlong, the class vice president: “This is one of the only family events that the entire family can come to. A lot of senior events, only one parent or two parents can go to. This is a great event that the whole family can be a part of and celebrate their senior student.”

Select Board Member Brendan Tedstone threw his support behind the event, especially with the uncertainty surrounding COVID.

“Although I don’t think it’s going to be as momentous as the first year, it’s hard for me to tell somebody that they can’t do it, where we still have COVID and we don’t know what’s going on with COVID. The whole world might be shut down by the time their parade happens,” Tedstone said. “I know we had an in-depth discussion last year about maybe last year being the last year, but COVID has not gone away, and we don’t know what the deal is. Who knows what happens?”

The town’s emergency departments expressed concern with the congestion the event causes, noting that emergency response times are delayed because of it.

“I am concerned with the amount of cars that this event produces and the congestion it causes on the parade route impacting the response of the [Fire Department] to [emergency] calls on those specified streets or even to a participant’s emergency,” Fire Chief Bill Miller wrote. “This is a slow moving, dense parade that can last for a long period of time from start to finish.”

Board members also noted that the Main Street Corridor Project could make it more challenging for traffic to flow along Main Street, which is part of the 9.5-mile course.