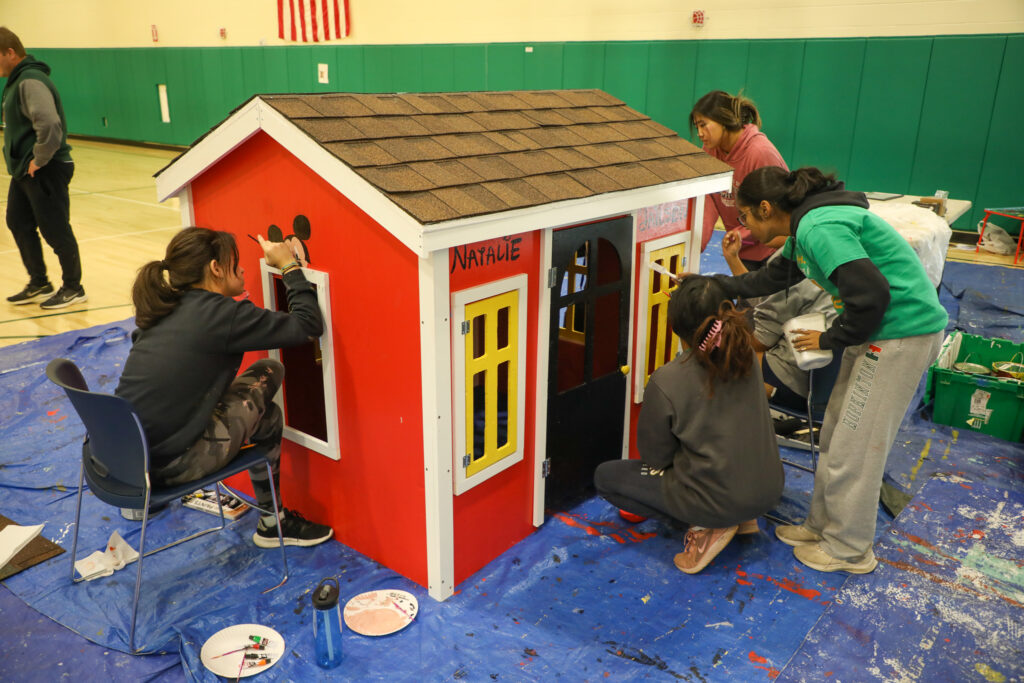 Members of the HHS Habitat for Humanity Club work on a playhouse at Marathon School. PHOTO/JOHN CARDILLO

One day, 2-year-old Natalie and 1-year-old Jailson Lucien will learn that a group of Hopkinton High School students helped to build their Mickey and Minnie Mouse-themed playhouse to honor their father Vincllor, an Army veteran.

The high school’s Habitat for Humanity Club held an Operation Playhouse Build with the support of the organization’s MetroWest/Greater Worcester chapter. The program involves creating and decorating a playhouse of approximately 4 feet by 5 feet from a kit and donating it to a veteran’s family.

On Oct. 8, some club members spent the day at the Marathon Elementary School working on the project. The event concluded with a presentation to the Lucien family, who are Brockton residents.

Vincllor Lucien was deployed from 2015 to 2016 as a 91B wheeled vehicle mechanic/H8 vehicle recovery specialist to Kuwait with the 1060th Transportation Company in support of Operation Enduring Freedom.

Samantha Breen, HHS English teacher and Habitat for Humanity Club advisor, said the students have been extremely excited about Operation Playhouse Build. Because of the pandemic, the group hadn’t been able to build anything for some time.

The club boasts 61 members with about 15-20 regulars who hold fundraisers throughout the year such as a gingerbread house decorating event and Krispy Kreme Donut sale.

“This program is an awesome way to give back to the community and veterans’ families,” Breen said.

She added that the Hopkinton-based build was unusual because participants got to see members of the Lucien family in person at a brief ceremony at the end of the day.

“That presentation made it all the more special,” Breen said.

HHS senior Avani Daga, a club officer, said participating in the group is “an extremely fun way of giving back.”

Daga said the best part of the day was personalizing the playhouse for Natalie and Jailson, which involved decorating the inside with Mickey Mouse-themed toys and glow in the dark stars as well as adding details to the structure on the outside.

“Other than actually making the playhouse, the best part of the day was definitely meeting Mr. Lucien, learning a little bit about his story and being able to give back to him and his family for all that they have done for our country,” Daga added. 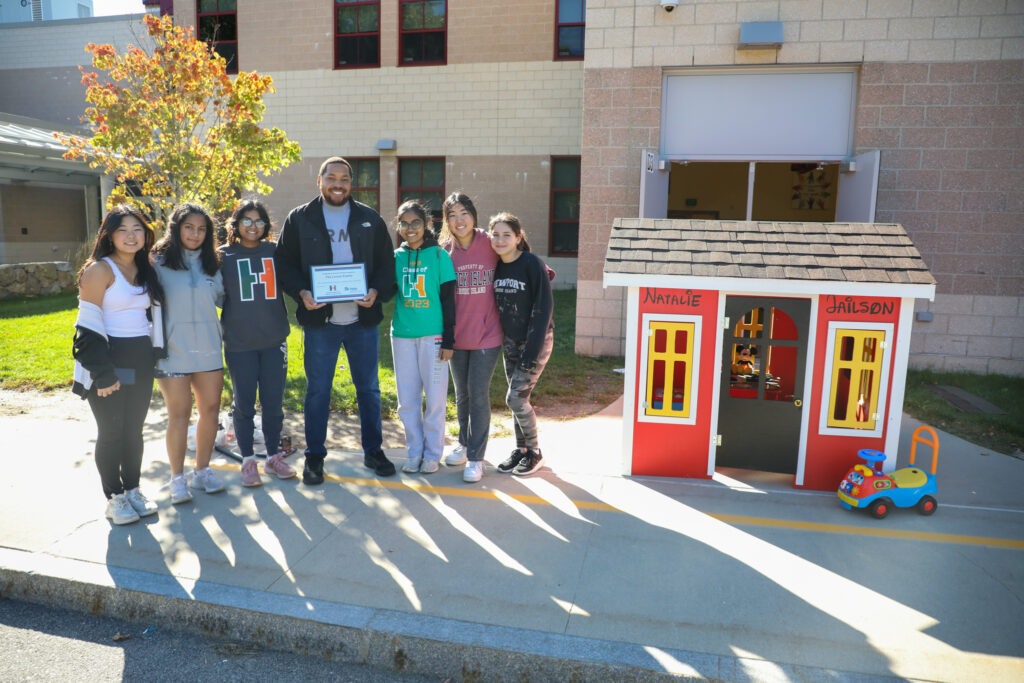 A few adult volunteers were on hand to use the drills and power tools and assist the students.

Brian Gu, also a senior and club officer, said he was attracted to join the Habitat for Humanity group because it is “so in touch with the community” and he wanted to be “part of a cycle of giving back.”

Gu said he was only there for the painting part of the build and found “getting dirty with actual paint for the first time a fun, new experience.”

He added, “After the first splash of paint hit my shoe, I stopped being afraid of getting my clothes covered in paint.”

Freshman Lea Hong, a new club member, said that she enjoyed participating in the build but wishes she was older so that she could actually help assemble the playhouse. Other than that, Hong hopes to repeat the experience with other builds.

HHS junior Anay Pachori, another new club member, said the most challenging part of the day was bringing everything together. The kids were in separate groups completing tasks like painting and putting the framing together, so coordinating and bringing the build together was the ultimate goal.

For Gu, the most difficult part of the experience was “watching paint dry.”

He explained that the students were so excited to build the best playhouse that they had to “hold in their excitement” and wait for a half-hour before putting on second coats of paint and drilling in the screws.

Daga encourages others to participate with Habitat for Humanity because it is a very “hands-on” way to make a difference.

“You really get to see how you are making a direct impact on your community and people,” Daga said.

When fundraisers and builds come around, Gu noted, “you can get your hands dirty and see change happen.”