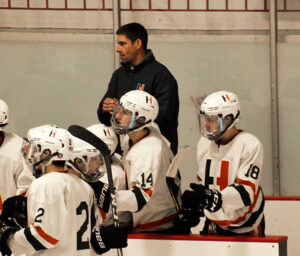 Hopkinton High School hockey coach Chris MacPherson is the subject of a lawsuit filed by parents of a player who said he was bullied by teammates last season.
FILE PHOTO/JERRY SPAR

Hopkinton Public Schools issued a statement promising to work to create a safe environment for all students after it was revealed this month that the parents of a former Hopkinton High School freshman sued Hopkinton High School hockey coach Chris MacPherson for failing to stop players from harassing their son last season.

The suit was moved to U.S. District Court in Boston in early January, after initially being filed in Middlesex Superior Court in November.

The boy, who was identified as John Doe in the lawsuit, claimed to have been harassed daily between December 2018 and February 2019, most notably in the locker room and on the team bus. The suit indicates that MacPherson failed to stop the harassment after being notified about it from the start by Doe’s father, who first met with MacPherson on Dec. 10.

According to the complaint, “Doe was harassed by teammates due to his failure to conform to male gender stereotypes and perceived sexual orientation.”

The suit alleges that fellow players took photos and videos of him, including some in the locker room and at least one of him exiting the shower, and posted some on SnapChat. The suit also alleges that the teammates frequently teased him about his perceived sexual orientation.

The boy eventually left Hopkinton High School and enrolled in a private school. The suit indicates Doe started lashing out at his family and his grades suffered. During the season he started mental health therapy, which was continuing this year.

The suit alleges that MacPherson “did nothing” to stop the harassment, even failing to ask Doe “how he was doing or if any of the behavior that his father had reported was continuing.”

It continued: “MacPherson promised to watch out for any harassment, but then took no action and did not monitor the locker room or buses where the harassment occurred.”

According to the suit, “MacPherson’s failure to act was reckless, deliberately indifferent, and caused John Doe significant harm.”

Asked by the MetroWest Daily News in early January why Doe’s family elected to sue only MacPherson, attorney Joseph Sulman said, “That’s just the decision we decided to make.” Asked if the family would pursue further action, he said. “We’ll see where the facts lead us.”

As reported by the Hopkinton Independent last March, eight underclassmen were suspended from the team in February for the remainder of the season.

In a press release issued Jan. 12, after the lawsuit became public, superintendent Carol Cavanaugh called the behavior “wholly inconsistent with the high standards of behavior demanded of our student-athletes” and indicated that law enforcement “became involved” to address the issue.

“Following the investigation, school officials worked with and will continue to work with the athletic director, coaches and all teams to reinforce anti-bullying training and to create an environment where students feel safe enough to come forward and report concerns to an adult,” Cavanaugh stated, adding that there would be no further comment “due to the confidentiality rights of all parties involved.”