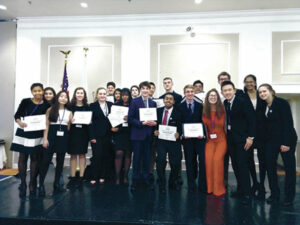 A Hopkinton High School student was elected president of the Massachusetts chapter of the Business Professionals of America organization, and 10 of her classmates earned spots to join her at the National Leadership Conference in May.

HHS junior Tiffany Ramsarran was elected president for more than 400 other members during the State Leadership Conference in early March. A member of the Massachusetts BPA since sophomore year, Ramsarran campaigned for the post after spending last year as the vice president and social director for her school’s BPA chapter.

The BPA is an organization that is focused on the professional development and future of our youth, “providing the tools, skills and experiences students need to compete, succeed and thrive in the business world.” With 45,000 members in more than 1,800 chapters across 25 states and Puerto Rico, students in the BPA have the opportunity to learn about business and information technology subjects and compete in categorized events such as economics, computers and entrepreneurship.

To campaign for the role of president, Ramsarran not only had to garner support from fellow BPA members, but she was required to study for and take a test about the history and regulations of the state and national BPA organizations, and interview for the position with the board of directors and state officers team, a task for which she was well prepared, according to her adviser.

“Tiffany’s election to the position of president of MABPA is a testament to her dedication and hard work that is respected by adults and students,” said Hopkinton Public Schools business/technology/engineering subject matter leader and BPA chapter adviser Doug Scott. “She is a terrific leader and a great role model to students in Hopkinton and beyond.”

This is not the first experience Ramsarran has had with leadership and service. She has held a number of leadership positions in her school and community including Diversity Club president, a volunteer for Project Just Because, an after-school tutor, and member of the leadership group at her church.

“It has been amazing being involved with BPA,” Ramsarran said. “I have gotten to meet so many people and have made lifelong friendships around the state.”

Last year, Ramsarran’s video production team placed first at states and first at nationals, which was a big reason why she ran for state officer.

“This is preparing me for my future career,” said Ramsarran, who would like to study business in college. “The skills I am learning in communication, being able to work in a team. …these are skills that will give me opportunities to help my own community in the future.”

The BPA is an after-school club at HHS sponsored by Hopkinton Public Schools, HPTA, Bose, mentors and private donors.