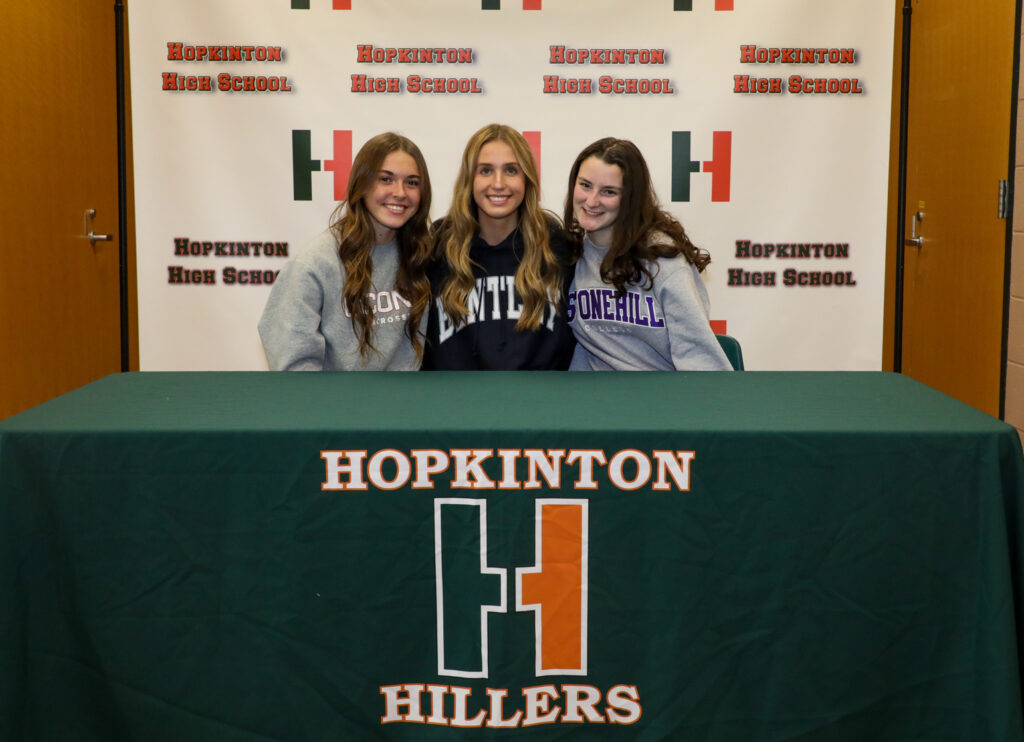 Hopkinton High School recently held a signing day in which athletes inked their letters of intent to continue their careers at the collegiate level, and a trio of Hillers lacrosse players will be playing at the next level after years of being teammates.

Emma Dacey signed her letter of intent to compete at the University of Connecticut, Emily Hayward will play for Bentley University, and Michaela Scannevin made official her commitment to Stonehill College.

“Signing day was so special,” Scannevin said. “I have played with Emily and Emma for so many years. I love them both and I am so proud of them, it was so special to share that moment with them.”

Joining the three lacrosse players was Keira O’Connor, who signed her letter of intent to join the Holy Cross track and field program.

For Dacey, who committed to UConn a season ago, the actual signing of her letter of intent left her both relieved and even more excited to get to Storrs. She said she recently traveled to the Connecticut campus for her first “official” visit, which included an overnight stay in the dorms with her future teammates and a chance to watch the men’s basketball team play its opening night game.

Dacey admitted that seeing all of those big-time athletes up close was “a little scary at first,” as she realized she soon will be joining their ranks.

“Seeing that everyone has the same personality as me, it made me feel like I was going to fit in,” she said. “Everyone there wants to work hard but have fun at the same time.”

Dacey said her future college coach, Katie Woods, told her, “You have no idea how good you can be.”

For Hayward, the choice to attend Bentley came down to the combination of a top-notch business program, a competitive lacrosse team and a picturesque Waltham campus that is not too far from her home.

“I grew up playing lacrosse and I just love the sport,” she said. “So being able to play in college was a dream of mine. Bentley has a very driven team and they want the best out of everyone, it’s a great environment.”

“Growing up, all I thought about was how fun it would be to play in college,” she said. “To have it come true felt great. I felt really accomplished.”

All three players said they have goals to accomplish during their final spring playing together. Dacey said she wants to become more of a threat on the field, while Hayward is hoping to reach 100 career goals. Scannevin, a defensive-minded midfielder, said she hopes to strengthen the offensive part of her game.

“I am very excited for this season,” she said. “I am hoping we can work really hard and make some improvements from last year.”

Asked whether she will be keeping a close eye on the teams at UConn and Bentley in a year, Scannevin was emphatic. 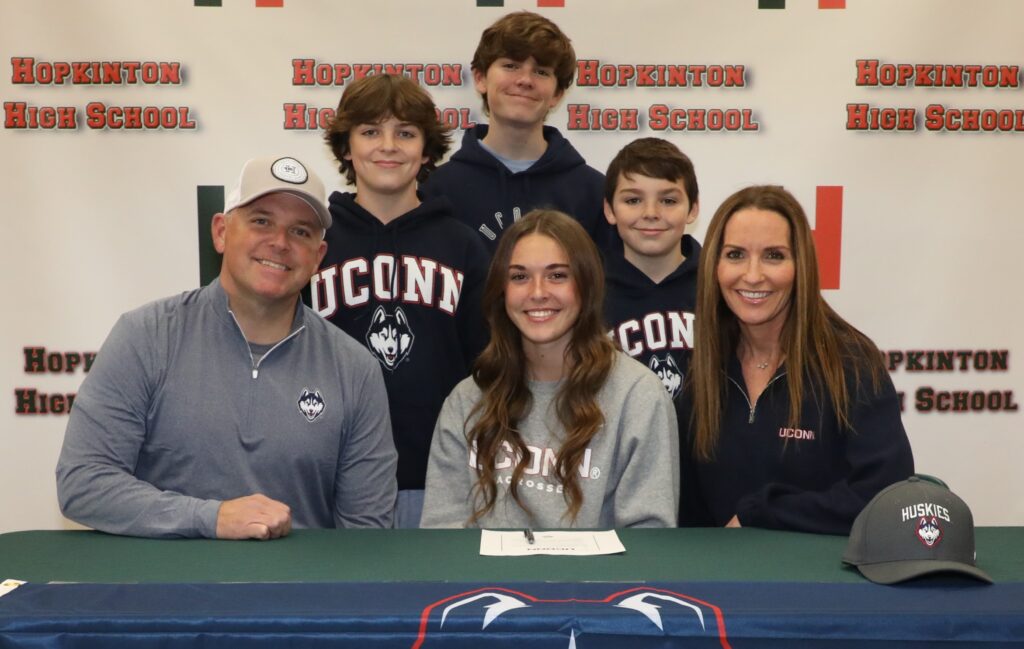 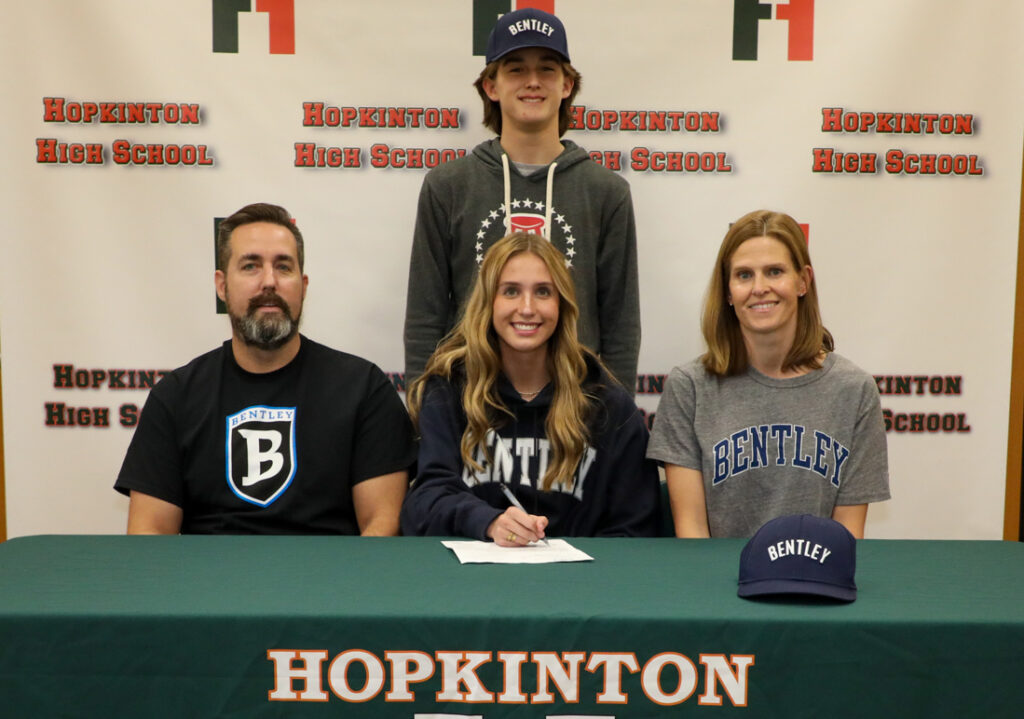 Emily Hayward signs on to play at Bentley alongside (from left) father Sean, brother James and mother Kate. PHOTO/JOHN CARDILLO 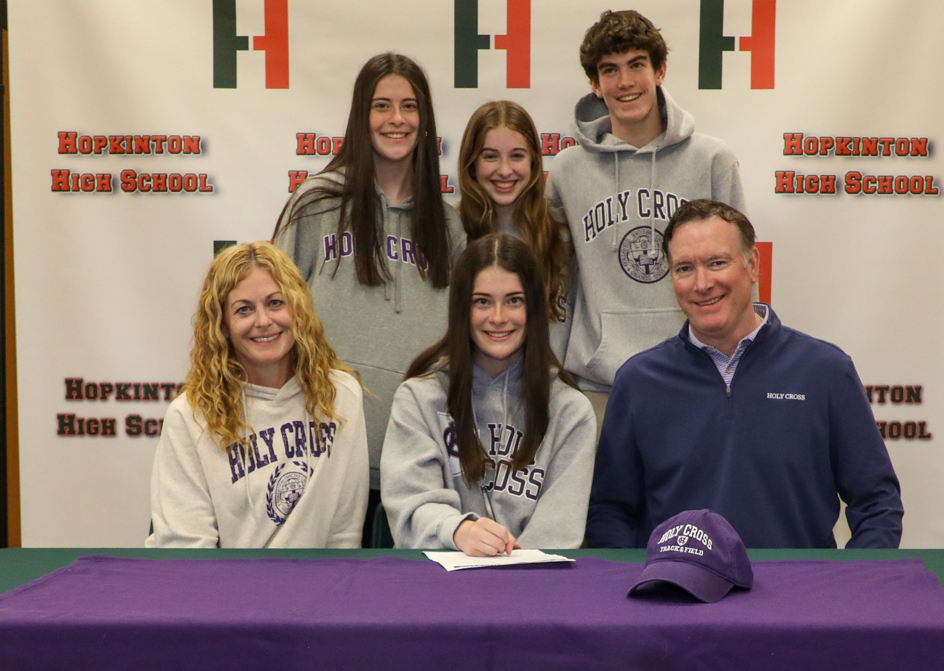 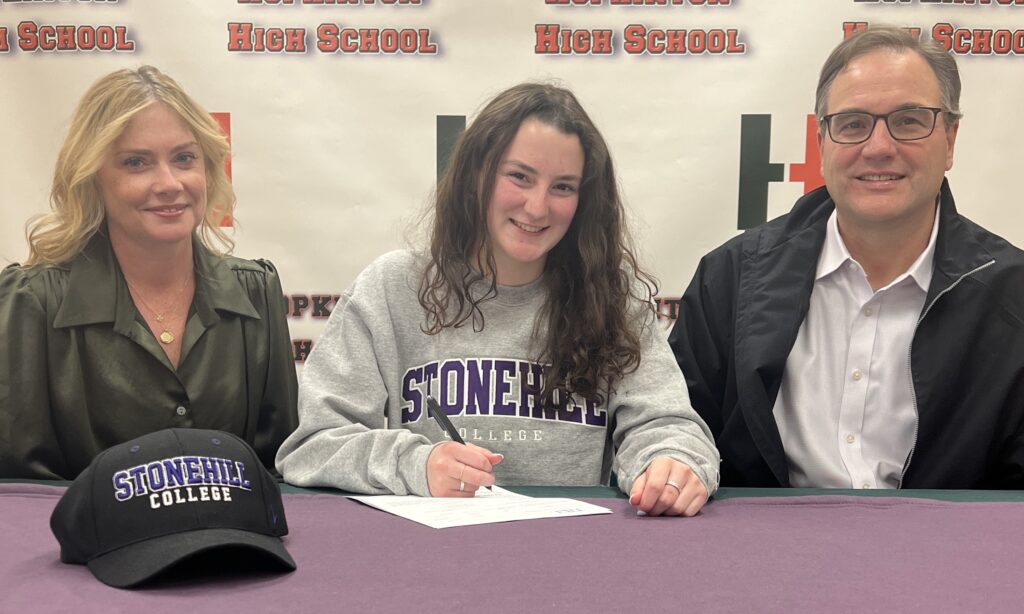