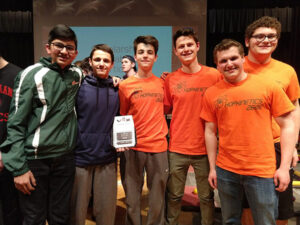 Some members of the HHS Hopkinetics Team 2602A pose with their trophy from the Southern New England Championship last month. They are (from left) Krutarth Parmar, Jake Chirco, Jacob Mauro, Riccardo Negri, Alex Clark and Nate Krozy.

The hard work and perseverance have paid off for two Hopkinton High School robotics teams that qualified for spots at this month’s international tournament.

The competition brings together robotics teams from across the globe to compete in challenges with robots that the teams design, build, program and drive.

“Getting to the worlds is a really big thing,” said Sudhaman, an HHS sophomore from team 2602H. “We were really happy to find out we were going. It is going to be a really fun event.”

The two teams won spots at the worlds after competing at the Southern New England Championship at Quinsigamond Community College on March 16-17. After working on designing, building and “testing, testing, testing” their robot, the teams were ready for the qualifier challenge.

“We were confident we would make it to worlds,” said Sudhaman, after none of the HHS teams qualified last year. “We worked hard to be ready.”

That effort can be attributed of each of the six HHS teams, according to coach Doug Scott, who also is Hopkinton’s business/technology/engineering Grade 6-12 subject matter leader.

“We are extremely proud of the teams at the middle school and high school,” Scott said. “These students work in teams for 12 months to prepare to qualify for the international competition, so to have three teams (two high school and one middle school) from our program make it speaks to the students’ dedication and passion.”

Not only do the high schoolers work on their own robot designs and programs, they also take time to mentor the students on the middle school robotics teams by answering questions and helping them troubleshoot.

“We are developing soft skills and leadership in this program more than anything,” Scott said.

As for the high schoolers, the skills they are learning go way beyond the technical.

“I have learned that this may be hard, but it’s a lot of fun … unlike anything you will ever do,” Sudhaman said. “It is really cool that I grew up playing with remote control cars and now I get to build them.”

Now that the spots are secured, the teams are looking to raise funds for the trip to the world competition. The Hopkinetics will be hosting a fundraiser on Saturday, April 6, for students in Grades 1-8 who would like to take part in a mini-robotics tournament. No prior knowledge is needed. For more details or to register, email Scott at dscott@hopkinton.k12.ma.us.

Although this is a special expense, Scott said that the program is fortunate to receive a great deal of support — financial and otherwise — throughout the year from the administration, parents and especially sponsors, including Trade Hounds, ESTEM Solutions, RoboSource, Bose, REC Girl Powered, Hillers Pizza, Tricon Sports, private donors and the Hopkinton Public Schools.