HHS’ Scott revels in national teaching award: ‘I enjoy what I do’

Such life-changing results are all in a day’s work for Hopkinton High School robotics/engineering/technology teacher Doug Scott — even if he doesn’t use that word to describe his daily efforts.

“I don’t see it as work,” said Scott, who oversees the Business, Technology & Engineering Department for Hopkinton Public Schools. “I enjoy what I do.”

So did the judges for a prestigious national teaching honor. 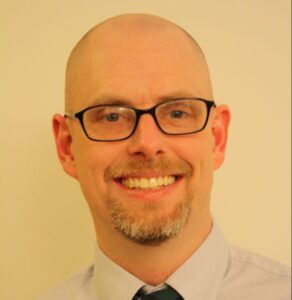 Scott this month was one of two Massachusetts teachers to receive the Presidential Award for Excellence in Mathematics and Science Teaching. The award is the highest honor presented by the U.S. government specifically for K-12 math and science teaching.

“It was a pleasant surprise for sure,” Scott said.

Teachers are selected based on their distinction in the classroom and dedication to improving science, technology, engineering and math (STEM) education.

Scott was nominated by Dr. Leigh Estabrooks and Tony Perry of the Lemelson-MIT program. The program, based at MIT, is focused on invention education and teaching young people to become inventors through engineering.

Scott serves as a mentor to other teachers in the program.

The award application process was rigorous. He had to submit a 30-minute video of himself in class and then break down the video, reflecting on his educational choices.

The video he provided showcased a lesson with his students and what might seem an unlikely collaborator, the Hopkinton Police Department. The students work each year in separate lessons with the Police Department and Fire Department to discuss the challenges they face and develop possible technological solutions.

“They have difficult jobs obviously and they rely heavily on technology, whether they be simple or complex,” Scott said of the town’s first responders.

The lesson involving the Police Department made sense to submit for his video, he said, because it was “a good lesson to look at.”

For one thing, he had to curb the participants’ enthusiasm, in a sense.

“Everyone wants to solve problems right away,” he said of both the students and the police officers. “I had to refocus the kids.”

Before a solution can be developed, students were reminded, the problem has to be identified and quantified. Working with the police, students developed a “problem statement” that detailed the challenge they faced. Students then had to research the issue to learn more and ensure it was a widespread challenge and not just an individual concern, he said.

“There were a lot of different learning moments during that visit,” he said.

Although the effort was not related to the award, Scott and his students have drawn a lot of positive attention locally and beyond for developing a plan to use 3D printers to make face shields for first responders during the pandemic.

He and his student team created 6,000 face shields as of early August to keep people safe during the pandemic.

About 4,000 were built from scratch using the 3D printers and designed for use by medical professionals. Another 2,000 were created for Hopkinton youngsters to wear, using components the group purchased and assembled.

“This was a great opportunity for kids and some residents to pitch in and do their part to fight COVID-19,” he said.

As part of the award process, Scott also had to provide a portfolio of his accomplishments. “This was the most rigorous self-assessment I ever had to do as a teacher and even as a person,” he said. “I learned a lot about how I teach” and was able to make improvements. The process was “insightful,” he added.

Scott hopes students say the same about his classes. He may be at the front of the classroom, but students must take responsibility for their learning, he said.

“I’m not a top-down type,” he said of his teaching style. “I merely facilitate their learning. You have to allow students to take ownership and leadership of their own education.”

The secret to being a successful teacher is no secret at all, Scott said.

“You just have to work really hard,” he said. “Good teaching is like any other endeavor. If you put time and effort into it, you’ll have good results.”

Winning the award takes more than one individual’s effort, he added.