The HHS boys (above) and girls ski teams both finished in second place in the Central Massachusetts Conference Ski League in the recently concluded season. 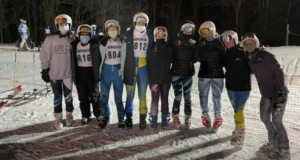 Like every other sport during the COVID-19 pandemic, skiing looked a little different this year. The Hopkinton High School boys and girls teams needed to make sure they stayed spaced out and kept their numbers down on the hill, but what they love the most about their sport is the chance to compete, and that was not taken away.

“They adjusted really well,” said coach Nancy Schlussel. “Skiing is a fun sport, we have always been the fun team because we get to go outside in the winter and slide as fast as we can down Ward Hill.”

The Hillers did not let masks or distancing stand in the way of enjoying their season.

“Their spirits were high, they were happy to be out there,” Schlussel said. “After a full week of online classes or their hybrid format they looked forward to some fresh air, and I was happy to provide that for them.”

Hopkinton was able to schedule more practices and meets than Schlussel might have thought possible at the start of the season. Part of the reason for the successful season is the advanced preparation. Conversations between Schlussel, athletic director Rich Cormier, the league and the ski facility — Ski Ward in Shrewsbury — began in October.

“We had many meetings to talk about how we could pull this off safely, knowing what our normal numbers are,” Schlussel said.

Practices were cut from two hours to 90 minutes to allow for the fact that only one team was able to train at a time. During meets, instead of having skiers from different schools alternate, all of the Hopkinton athletes skied together and then their times were compared to those of their opponents.

The modifications did not slow down the Hillers at all, as both teams finished second in the Central Massachusetts Conference Ski League to Algonquin.

For the girls, senior captain Cate Barry led the way, earning multiple first-place finishes. Freshman Klara Niss, a longtime racer who has been competing since elementary school, and Libby Herlihy, a sophomore, were fixtures in the top 10 at meets, padding the girls team’s point total.

Sophomore Ally Barry is a recreational skier, but Schlussel said she “found her race legs this year and showed us some great skills out there on the hill.”

The girls also had a trio of talented juniors — Gabi Ciri, Tori Fischer and Avery Hutchinson — who developed a friendly competition with one another that had each of them pushing hard for faster times.

“They were all putting it down each week and ripping up the hill,” Schlussel said.
Freshmen Sidhi Dhanda and Jordis Vogel quickly learned the ins and outs of competitive skiing after coming from a recreational background.

“They worked hard in practice, they asked questions and they tried new things,” Schlussel said. “They have a good future ahead of them.”

On the boys side, senior captain Jackson Schlussel won every single race this season and embraced his role as a leader, freely sharing his knowledge and experience with his teammates.

Sophomore Mathias Niss is an experienced racer who was consistently in the top 20. Jake Lacoche joined the program after racing at Waterville Valley and earned a few top-10 finishes. Senior Cameron Hanna was another regular in the top 10.

“He is a fun one to watch,” Schlussel said of Hanna. “His second run is always faster than his first. It’s exciting to watch him come down for his second run.”

Junior Samuel LaGoy was a new addition who Schlussel said quickly “caught the ski bug.” The rest of the roster was made up of seniors who were happy to be competing in a year unlike any other: Nathan Foster, Andrew Herlihy, Benjamin Kisija, Nick Leccese and Connor Murphy.

“They have been with us for three or four years now, and seeing them come from a recreational background to competitive racing has been fun to watch,” Schlussel said. “They didn’t have a state tournament to go for, but they knew this was their last year so they were going to put it down. They were so focused and training hard and making the most of it.”