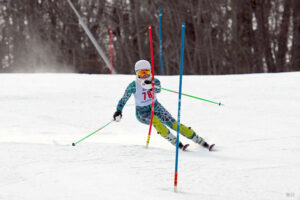 Junior captain Cate Barry is in her third year with the HHS ski program.

The Hopkinton High School ski team is fielding its largest roster this winter, with numerous talented athletes who have been racing for years and have competed at the highest level and are more than happy to help some of their younger teammates become the best skiers they can be.

“All of our kids who come in here with a racing background are willing to share it with the new teammates who are just getting into racing,” said coach Nancy Schlussel. “They share tips, take them on free runs and give them pointers. They inspect courses together and talk to them about how to run courses.”

Schlussel said the camaraderie among the Hillers is palpable.

“Hopkinton is one of the loudest groups at the start line,” she said.

The ski season was slowed somewhat by unseasonably warm temperatures in early January, but several skiers showed some promise in the first competition of the year.

Junior Cate Barry has been with the program since her freshman year and has been racing with the U.S. Developmental Team since she was 11 years old.

“She brings a lot of strength, a lot of knowledge, and she is our biggest cheerleader,” Schlussel said of her team captain.

Ally Barry, a freshman, has been racing since she was 8 years old. Schlussel was her coach during her junior skiing days.

“She raced competitively for four or five years, took some time off, and is now coming back as a freshman to high school racing,” Schlussel said. “All of her skills are still really strong and now she gets to race for her school and she loves that feeling.”

The members of the team take great pride in competing for the Hillers, Schlussel said.

“Most of them just want to have fun and be part of a school sport,” she said. “They ski for fun and they race for fun in the winter. Being able to be on a team and represent their high school is something they love. They love walking around the school and hearing the kudos for how well they are doing.”

Schlussel said the ski team also likes being the team that competes off campus, with meets at Ward Hill in Shrewsbury.

Libby Herlihy is one of the top newcomers on the girls roster this year. It’s her first time racing, but she has extensive experience as a recreational skier.

“She has strong skills and she loves racing,” the coach said. “She loves getting into the game and the challenge of what racing brings to her skiing.”

This year’s roster has 25 athletes, 17 of whom are boys. Senior Max Rodgers is back with the Hillers this winter after winning the league last season. Hopkinton competes in the Central Mass. Conference Ski League, along with St. John’s, Nipmuc, King Phillip, Shrewsbury, Westboro, Millis, Wachusett, Algonquin, Medway and Ashland/Medfield.

“Max has been racing as part of the Loon U.S. Development Team, he is strong in the slalom and the giant slalom,” Schlussel said. “He is very driven.”

Jack Rodgers (Max’s twin brother) also has been a standout, bringing strong skills to the program in his second year racing competitively. Jackson Schlussel is another experienced racer, having competed since he was 7 years old. The top boys on the team were neck-and-neck with one another during the first meet of the season.

“They push each other in a friendly, competitive way,” Schlussel said.

Hopkinton is in its fourth season with a ski team, and every year the program has gotten larger. This winter the Hillers have twice as many girls as they did last year, and most of them are freshmen and sophomores, setting up the team nicely for the future. Schlussel said she wants to see both teams compete with the top squads in the league again this winter, and continue to sharpen the skills for skiers of all levels.

“In four years with our program, our goal is to develop top-notch high school racers,” Schlussel said, “along with a lot of love for the sport.”