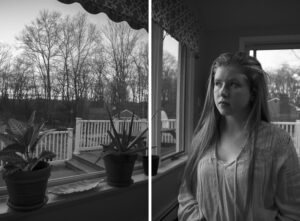 Ceara Perry’s submission is a diptych showing her gazing out a window.

Two Hopkinton High School sophomores will have their photography work on display at the Emerging Young Artists Juried Exhibition, which started Jan. 22 and runs through Feb. 9 at the University of Massachusetts-Dartmouth.

Sophomores Ceara Perry and Catherine Dacey, who both are in the HHS advanced photography class, Photography 2, were assigned a project that required them to do a self-portrait. Art teacher Sterling Worrell was impressed by their work and thought they were worthy of submitting for consideration.

“It’s really competitive, so I just pick out a couple, the best of the best, to send in there that I think have a shot,” Worrell said. “The two I sent in both got in, so that was good. I was excited to have them selected.”

Added Worrell: “I’ve been emphasizing working with the qualities of light and composition, and these two photographs definitely have that. But not all the students are able to — not to use a cliche—but take it to the next level, which is like having a photograph that has a narrative or a story, some meaning. These two did that, so

I’m not surprised they got in, because if you look at their photographs there’s a real narrative story to what’s happening in the picture. It makes you think.”

Perry’s work is a black-and-white diptych (two panels) of her standing and looking out a window.

“While researching people photography at school, our class viewed a slideshow of artists to draw inspiration from,” Perry explained. “One artist I liked was David Hilliard. His pictures are often diptychs/triptychs with the subject looking across the frame. To emulate his style, I took a diptych picture of myself looking out the window.”

Perry had her sister stand in for her while she set the shutter speed, aperture and focus on her camera, then she started shooting.

“I took about 50 pictures total for this shoot, and selected the two best pictures to edit together for the diptych,” she said.

Dacey’s photo features her sitting in front of a window while her mother brushes her hair. 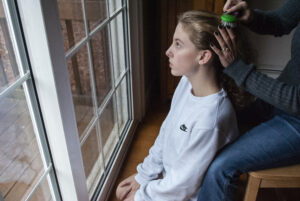 Catherine Dacey’s photo shows her having her hair brushed by her mother.

“Sterling had given us a few topics to explore during this project, including a self-portrait with a parent,” Dacey said. ”I really liked this topic because I thought it would be interesting to portray the relationship between my mother and I or my father and I. I thought of a few moments that I had shared with my mom, and I remembered that she used to brush my hair a.lot and do my hair for me. I felt that this would be interesting to capture in a photograph, so I began to plan out a picture.

“I wanted to show the bond between my mom and I, and how we still share moments like this. I liked the idea of my mom brushing my hair because I felt that it connected to the bond that most younger girls have with their mothers. I also liked how this moment, although it is staged, is still a very real moment and one that I still share with my mom.”

Dacey initially set up her tripod and camera in the living room, but she eventually ended up in the kitchen because the lighting was more to her liking.

“I had to try many times to get this photograph just right,” she recalled. “At first, the camera settings were not working well for me. I had to adjust ISO, shutter speed and f-stop many times, but it was still not turning out the way I wanted. I decided to adjust the camera angle many times as well, trying to reduce the amount of harsh light. Eventually we had to move into a different room with less light. “I was finally able to get the correct camera settings once my mom and I were sitting in the kitchen. I adjusted the angle and my position a few times before getting the photograph that I wanted. I felt that this picture was the right one because the lighting was right and I had it focused more on window rather than on my mom and I, which I felt gave the photograph a softer look. I liked the peaceful nature and emotion that this particular photograph portrayed. I felt that the lighting and focus were just right to portray our relationship and bond as I had wanted.”

While Worrell suggested entering the photos in the contest, the teen- age photographers have had to do the majority of the work to get them displayed. “They have to be teacher-nominated, but they go through the process,” Worrell said. “And that’s part of it. I usually pick some advanced kids, and it gets an opportunity for them to have to go through the whole act of putting something in a show. They have to frame it, prepare it, deliver it, attend the artists reception — the whole bit. So it’s really a real-world opportunity for them.”