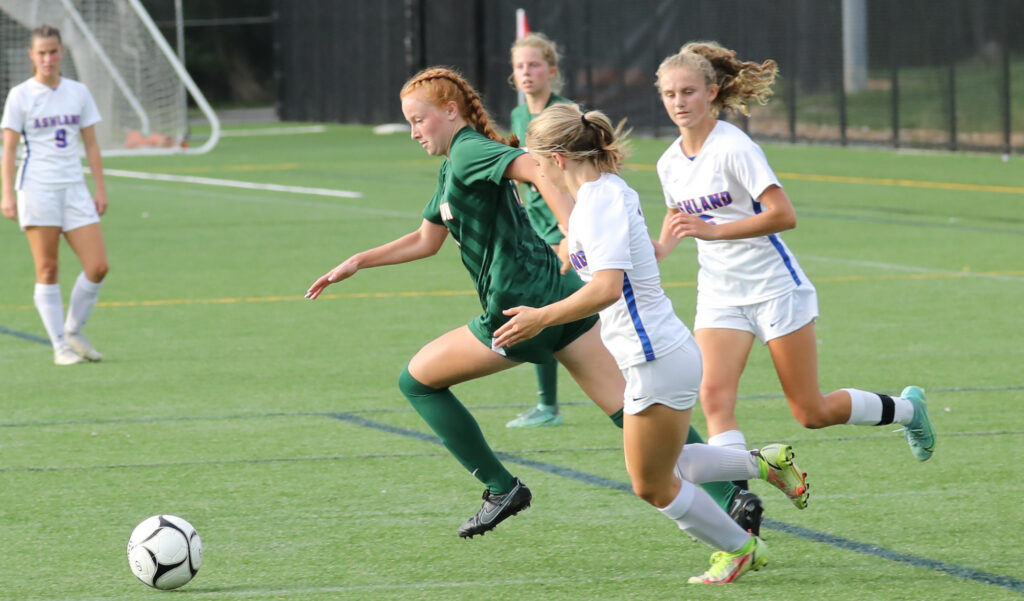 Georgie Clarke, shown in action against Ashland early this season, will play at Boston College in the fall of 2024. PHOTO/JOHN CARDILLO

Georgie Clarke has proven herself as an elite finisher and a top high school soccer player over the past three years, a skill set that has landed the Hopkinton High School junior a future spot with the Boston College women’s program.

Clarke said there were a number of things she was looking for in a college program, and the Eagles checked all the boxes.

“I wanted great academics, location, the soccer, the environment, the coaches, and BC had all of that,” she said. “The soccer program is insane, it’s in the ACC [Atlantic Coast Conference], which is a conference I really wanted to be a part of. And Boston is right around the corner, it’s 45 minutes from Hopkinton, which is perfect.”

Clarke committed to BC after a junior season in which she scored 21 goals and added a trio of assists in 15 games, an average of 1.4 goals per game. A whopping 68 percent of her shots ended up on target and one out of every three shots found the back of the net this fall.

The goals came in big spots, too. Clarke scored game-winning goals six times, including the goal that locked up the program’s first-ever Tri-Valley League championship. With Clarke helping to lead the way, the Hillers advanced to the second round of the state tournament before falling to Bishop Feehan.

She earned TVL All-Star recognition along with first-team All-State and All-New England honors and was named the TVL’s most valuable player.

“She a great player who works tirelessly to improve herself and gives everything to help her teammates succeed,” HHS coach Tom Skiba shared.

Clarke, who in turn offered thanks to Skiba for his coaching, said she first went to BC for a camp in 2019. On her visit, she fell in love with the Chestnut Hill campus, and her first impressions of the team and coaching staff were very positive.

“I really liked the coaches, I feel like they will motivate me and push me to be the best I can be,” Clarke said. “The soccer program is amazing, and the teammates seem amazing, too.”

Clarke said her parents, Simon and Ann, have been a huge help through the college search process. She also said her club team, FC Stars and coach Graeme Blackman, and her personal trainers, who she affectionately calls Coach A.J. and Coach Adel, have been instrumental in her development as a player and as a person.

Now that she knows she will be an Eagle, Clarke said she will have to work hard in order to prepare for playing in the ACC in two years.

“If I train my butt off this year, I will be in a great position,” she said.

Clarke sees herself as a diverse player who could fit in with BC anywhere on the attacking half of the field. She said she is excited to take her game to the next level, but first she wants to build on the success that Hopkinton saw this fall.

“I am really proud of how we played, we got some really tough wins,” Clarke said. “Next year, I feel like we could do the same thing. I feel like it’s going to be a great year and we could go even further.”