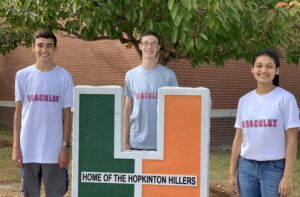 The reasons why people should support aquatic life could fill an ocean, members of a new organization led by Hopkinton High School students believe.

And in fact, they do, the students say. From a fish that produces 300 million eggs at a time to a footlong octopus that resembles a fictional Disney elephant, these creatures are vital to the well-being of the ocean where they live and deserve protection, the students believe.

Hopkinton High School juniors Gabe O’Brien, Chaitrali Samant and Jacob Waxman created Beachlex this past summer to showcase the stories of these creatures and the challenges faced by the ocean and its inhabitants.

Beachlex — the name is short for “beach lexicon” — features a website (beachlex.wixsite.com/beachlex) and Twitter (@Beachlex1) and Instagram (@beach.lex) accounts. The students also work to raise money for the Ocean Conservancy.

A peek into their social media introduces readers to a world of fascinating ocean creatures, from the common to the extraordinary.

— The flamingo tongue shell, a colorful denizen of the reef.

— The South Atlantic humpback whale, which is battling back from near extinction.

— The ocean sunfish, which can weigh up to 2,205 pounds. The female can produce up to 300 million eggs at one time.

— The dumbo octopus, which is named for its resemblance to the Disney character and lives more than 13,000 feet below the ocean’s surface.

But not all posts are as enjoyable to read. The group also featured Trash Island, a collection of floating trash and plastic that originated in the Pacific Rim. The feature notes that up 2.4 million tons of plastic winds up in the ocean, more than half of which is less dense than water and is unable to sink.

“We’re trying to show all animals deserve to be protected and call the ocean their home,” Samant said.

“With global warming and climate change, it’s as important as ever to protect our oceans,” O’Brien said.

O’Brien, who is founder and co-president with Samant, is no stranger to the ocean. He frequently visits Cape Cod, where he regularly photographed the sights, including some of the sea creatures that fascinate him.

He decided in July to transform his enthusiasm for photography into forming the official organization. 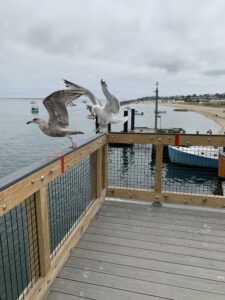 As they work to spread the word about Beachlex, the students are working to become an official 501(c)(3) non-profit.

They also are hosting a fundraiser in conjunction with the online clothing website Saltwater Dry Goods, which is selling a T-shirt to support their efforts (swdrygoods.com/products/beachlex-tee).

“We’re giving people a reason to care about the animals,” Samant said. She hopes their writings and posts will give readers “a personal stake” in the issue.

Sharks in and around Cape Cod have drawn a lot of interest, the group members said. Their social media has featured information about various types of sharks and the importance of each.

Although shark sightings can provoke beach closings and panic, the animals play a vital role in keeping the ocean ecosystem healthy, the students said, and should be protected.

“It’s their habitat,” Samant said. “They are an integral part of the ecosystem.”

Remove them from oceans, organization vice president Waxman said, and “The cycle of sea life is disrupted.”

As a result, O’Brien said, “Their prey would dramatically increase.” Sharks “help to keep everything in balance.”

Respecting the ocean will lead to protecting it, the students hope. “The ocean does not belong to humans,’’ Samant said.