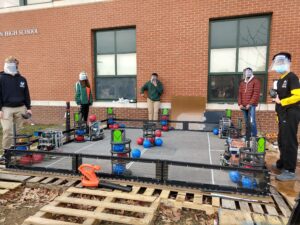 Members of the Hopkinton High School robotics team are no strangers to building and creating.

They also are familiar with winning awards, a tradition they have continued this school year.

During this season, the teams won an impressive slate of awards at this year’s Robotics competition. One team (Team 2602) won the Excellence Award, Tournament Champions, Design Award and Robot Skills Champion Award. Another team (2602G) won the Judges Award.

But their creations included something unexpected but necessary in the age of COVID-19: a safe, outdoor place to practice and compete safely.

Their structure, created on the grounds of the high school, kept their season going during a time when so many other events were canceled. The location was the only site for competitions in Massachusetts and one of the few in the country, explained Doug Scott, who oversees the Business, Technology and Engineering Department at the high school.

The structure took two months to complete, he said.

Work began in August when the team members agreed they still wanted to compete, despite the challenges.

The first step, in conjunction with school administrators and facilities personnel, was to find a location that would not fall victim to a snow plow.

A gift of pallets from Tom Donahue of McCarthy Pools shaped the foundation. Donahue, a graduate of Hopkinton High School, was “super happy to help” and drove the pallets to the school grounds, Scott said.

Then the students helped to complete the process. The work included creating layers of plywood and other filler to keep a strong base.

They built an A-frame design with support piping and stakes to protect the field and keep it strong enough to withstand snow. 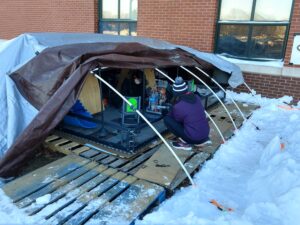 Students constructed the outdoor playing surface so the robotics season could be held safely. PHOTO/HOPKINETICS ROBOTICS

The field served both as a host to tournaments and as a safe space where students could practice on their creations with the necessary social distance.

“Having that extra space made a big difference,” Scott said. “It was very important that as a group we kept that field intact.”

Working together on robotics serves as a bonding experience, the students said. That only magnified this year, considering the circumstances.

Because much of the creative work was done via Zoom, the work had to be done from a distance and without seeing their creation up close. This required patience, teamwork and a shared understanding of challenges and potential solutions, the team members said.

Tanisha Rajgor said that in past years, the team may have “taken for granted” their opportunities. “This year we can value [their efforts] a lot more.”

Sidhi Dhanda was hesitant about her first year on the team and worried she would not enjoy it. “I was really glad to be wrong,” she said. “I had a ton of fun outdoors.”

Nitya Namblar was grateful to have “something creative to do’’ with robotics at a time when other outlets were limited.

That was exactly what Scott hoped would happen.

“I felt it was very important this year to see the kids and work together to have a season.” Scott said. “The students have worked so hard,” and for many of them, robotics has been “a big part of their school experience.”

One thing in particular won’t be forgotten when the team returns to more typical situation.
“We won’t miss shoveling,” he said with a laugh.