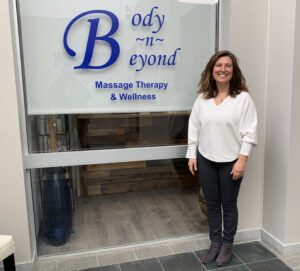 Hopkinton’s Anna Gammal kept a positive outlook despite a difficult 2020 for herself and her business, Body n’ Beyond Massage Therapy & Wellness, and now 2021 is off to a good start for both. PHOTO/JERRY SPAR

Like many small business owners, Hopkinton’s Anna Gammal, a massage therapist and owner of Body n’ Beyond Massage Therapy & Wellness, had a rough 2020. But it ended on a very positive note when she was named a recipient of financial support from a national charitable fund designed to assist small companies.

Gammal, a onetime competitive runner in her native Greece, emigrated 28 years ago despite not being able to speak English. She started her business in town 20 years ago.

A co-director of the 2004 Athens Olympic Games sports massage team and a member of the massages therapy team for the 2012 London Olympics, Gammal said that she had to close her business for 100 days at the start of the pandemic, reopening in late June. After her landlord of 20 years not only charged her full rent while she was closed but raised her rent by 20 percent for the new year, she said, she moved the business to a smaller location on South Street.

Shortly after the move, Gammal was diagnosed with COVID, apparently contracting it from a patient. She had to close the business for another month, although she continued to pay her employees. Then she was diagnosed with diabetes.

“It just has been insane,” she said in a Facebook video.

Through it all, with support from the “wonderful” community, including her loyal customer base, she continued to maintain a positive attitude.

“It has been tough, but I am very positive,” she said. “I believe that we need to have faith and hope. And I just love what I do. I love to see the people coming out of my office and help them with their pain. That’s like something to me that’s precious.”

Late last year, her son Nico sent in a video request to organizers of the Barstool Sports Fund, asking for assistance. Gammal was notified in December that she had been selected as one of the recipients of the fund’s small business grants.

“It felt like winning the lottery,” she said after learning her company’s rent would be covered from January until the pandemic subsides.

She said the support will give her a chance to slow down a bit.

“I never thought about it, but it’s a breather,” she said. “It will be [some time] to not really check the account to make sure that I have the money to pay.”

Also, kudos to Chef’s Kitchen on Main, which donated 600 fully prepared holiday meals to Project Just Because for distribution to individuals in need last month.