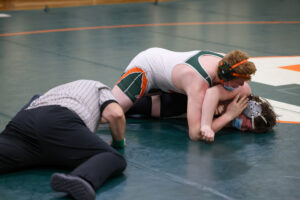 Just a few weeks into the 2021-22 wrestling season, Hopkinton High School interim coach Corey Mills could tell that the effects of the pandemic on the ultimate of close-contact sports were not entirely a thing of the past.

The Hillers had to shut down for a couple of weeks over the holidays. They scrapped a planned appearance in the Lowell Holiday Tournament and had a meet with Natick canceled. Hopkinton also had to postpone a league meet against Ashland. Still, Mills said he’s thrilled to have the team competing again during its usual season after being moved to the spring last year.

“The kids have really loved being back wrestling during the winter,” Mills said. “When we have been able to wrestle, it’s been a lot of fun.”

The opening weeks of the year were not all cancellations. Hopkinton won four of its first five meets and competed in the Milford Holiday Tournament. After graduating five wrestlers who placed at last year’s state meet and losing another potential state finalist to a prep school transfer, Mills said he has been pleasantly surprised with the early success.

“We were not sure what to expect,” he said. “This team has been really deep, though, and we have great leadership on the team, which helps us build up our numbers.”

Hopkinton has more than 35 athletes in the program, Mills said. Even during stretches in which multiple wrestlers were in COVID protocols, the Hillers have had more than enough to fill out a lineup. Seniors Sean Walker, Sebastian Losada, Alec Brookes and James Muzzy — all of whom are captains — have embraced their roles as leaders.

“They have all really stepped up,” Mills said. “They are doing a great job. When we were shut down during the two weeks over the holidays they reached out to the kids, did organized team runs, and kept the kids excited and interested in the sport.”

The quartet also has helped Mills, who has been with the program for more than a decade, with the middle school program that has been crucial to keeping the program’s numbers up.

Losada is someone Mills thinks could be a factor at the end of the year. He has been competing at 152 pounds, but Mills thinks he will be down to 145 by the time the postseason rolls around.

“I started coaching him in the seventh grade, so it’s been a long road for us,” Mills said. “He has a great work ethic and he competes well at a tough weight class.”

“He had a good football season and he has put in the work that is starting to translate into wrestling,” Mills said.

If there is a silver lining to the cancellations, Mills said it may be the fact that the Hillers will have fresher legs by the end of the season.

“If we get these meets in and get the consistency that we want to see, I think this is going to be a really solid team by the end of the year,” he said. “The kids are fresh, they are motivated, and they want to make the most of the last four weeks.”