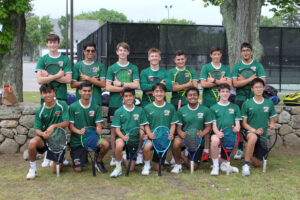 The deep and talented HHS boys tennis team was undefeated in league play heading into the final week of the regular season. PHOTO/JOHN CARDILLO

Hopkinton High School boys tennis coach Mike Miller has plenty of adjectives to describe the 2021 season, including “unusual” and “crazy.” But, unlike 2020, the season actually launched and the Hillers have taken full advantage, winning nine of their first 10 matches and racing to the top of the Tri-Valley League standings.

“It’s been a fun year and, from a record perspective, they are doing well,” Miller said.

One of the biggest challenges has been the usually simple act of getting the entire team together for a practice. With all of the delays and recently-lifted restrictions, students are finding themselves unusually busy at this time of the year.

Another wrinkle added into the mix is the fact that all high school-age students are eligible for a COVID-19 vaccine. On some days, Miller might lose a player for practice because he is getting a shot and then potentially for another day or two due to the side effects.

“Most days, we have just about all the kids there, but sometimes you put together the practice plans and we have a certain number of kids who are not able to come,” Miller said. “But this year we have learned to be flexible.”

And the athletes, Miller said, have been resilient.

“The kids have been great, if there is one thing I have learned from teaching and coaching here for 15 years is that the kids in Hopkinton rise to the occasion,” he said. “They understand sometimes more than we give them credit for and I think they are just happy to get back out there and play tennis.”

The Hillers are not just playing, they are playing well. Heading into the final week of the regular season, Hopkinton had a 10-1 record, including a perfect 10-0 in the TVL Large School Division. Senior leadership has been crucial, both on and off the court.

Senior captain Aidan Yagoobi, who has been named to multiple TVL All-Star teams, is playing the No. 1 singles spot and has won the vast majority of his matches. Sophomore Lex Kaye has been just as strong in the second singles spot.

Miller said the team has a good mix of seniors, a junior and some sophomores, adding that he’s been pleased to see how the older players have worked with their younger teammates. They’ve helped Miller learn two new classes of players, with sophomores he didn’t have last year during the canceled season joining the incoming freshman class as being new to the program.

Some players Miller did know have grown, in every sense of the word, since 2019. Senior Rex Lind is about six inches taller than he was sophomore year, Miller said.

“His tennis skill set has grown right along with that physical growth,” he said. “He primarily plays first doubles but he can jump in and play singles at a moment’s notice.”

Miller said he is focused on continued improvement with the postseason rapidly approaching. The Hillers are not setting any particular goals about where they might end up among teams in the league or in the area. Instead, they are enjoying playing and, thanks to the recently lifted mask mandate, Miller is able to see their faces for the first time this year.

“A year ago, they had their season taken from them, but now they are happy to be back,” he said. “It’s good to see them out there happy, laughing and playing together as a team.”