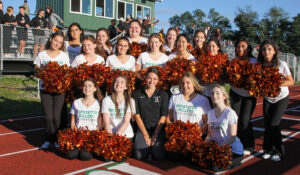 During Elise McMahon’s first season as the Hopkinton High School cheer coach, she guided the team through a season impacted by COVID-19 that included a virtual state competition at the end. She said the girls made up their own choreography and did their best to try to have fun.

This fall has been different. Hopkinton has twice as many athletes on the roster and is preparing for a series of live competitions. And the Hillers have responded to the higher stakes this season.

“I think they are just more driven,” McMahon said. “They have set a lot more goals because competitions are back and they want to do well.”

Last year, Hopkinton had just eight cheerleaders on the varsity squad. This fall, it’s 15. And being able to cheer for fans in the stands as opposed to sending in routines virtually is making a significant difference in the team’s approach.

“I think it’s huge,” McMahon said. “It really fires them up to have that crowd cheering. It was hard over the computer, obviously, where you can’t hear or see the crowd and you still have to try your best. It’s more of a positive experience in real life when they can hear the people they care about cheering for them and know people are there.”

HHS is being led by a pair of senior captains this year, Ashley Thomas and Lizzie Schneider.

“They have been super awesome with organizing the team and coming up with ideas for choreography and just being great leaders,” McMahon said.

The Hillers are set to return to live team competition Oct. 30 with the Shepherd Hill Invitational meet. McMahon said her team has set a goal of finishing in the top three at the Tri-Valley League meet in November. The Hillers also are hoping to qualify for the regional competition, something McMahon said has not happened in a number of years.

“I think they are definitely on the rise,” the coach said.

McMahon came to Hopkinton after working as an assistant coach at Foxboro. This is her first head coaching position, and she said it’s been “awesome” so far.

Long term, McMahon said she hopes to make qualifying for the regional competition a regular occurrence for the Hillers. She also wants to see her athletes perfect their skills and routines on the floor and build on those skills in order to take on more advanced routines.

But in the short term, she is just happy to have her team competing again under normal circumstances.

The new coach said her team has the ability to stand out in competition.

“They feel as though they are more successful than in past years,” McMahon said. “We have a lot of athletes who are very talented. They are showing up every day and they have been super committed.”