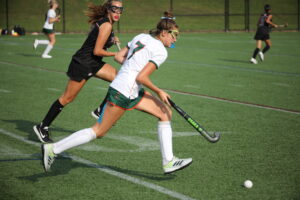 Sophomore Camille Perlov is one of the Hillers’ promising young players. PHOTO/JOHN CARDILLO

The Hopkinton High School field hockey team came into the new season with a relative dearth of returning players, but coach Becky Abate is using the season to develop crucial skills that should lay a strong foundation for the program going forward.

Even though the results did not show up in the win column through the first half of the year, Abate says the message is getting through. It was evident in a recent Tri-Valley League matchup against Dover-Sherborn.

“I was so proud of my team,” Abate said. “They played like a team that wanted to win, we just didn’t score. But I think we are playing a mental game. When you’re in a season like this and you’re not winning, it’s tough not to get discouraged.”

The effort against D-S followed a subpar outing the game before. After that contest, Abate said she talked with her team about accountability. Each player was asked to come up with one aspect of her game that needed improvement and promised to be accountable for that single goal. Abate had the players write the goal down on a piece of paper before the Dover-Sherborn game.

“I think it really helped them get into a good headspace,” she said. “We had a game that prior Saturday that was abysmal. We were making a lot of the same mistakes over and over again.

The improvement in the next game happened without a single practice in between.

“There was no skill work from one game to the next, and yet I think just changing their attitudes made a huge difference,” Abate said. “They all saw the power of their mental performance, and it was great to see.”

With such a young team, it’s no surprise that many of the strongest performances this fall have come from underclass players. Sophomore Camille Perlov scored two goals in the season opener, a 2-2 tie that proved to be the Hillers’ best result through the first eight games.

“She is one of the hardest working players on the team,” Abate said. “She loves field hockey, she works at it constantly. She is incredibly fast and her skills are incredibly good. She is young, so there is room to grow, but she has been a standout.”

Another sophomore, Caroline Kane, has been solid in goal. Abate said she shares her classmate’s talent and dedication. Senior Fay Desmond has stepped into a defensive role due to a teammate’s injury.

“She has blown everyone away and raised the bar for our defense over the past couple of games,” Abate said.

Maura Souza, a junior captain, also has been a talented player for the Hillers this fall at the center back position.

Hopkinton will try to find more offense during the second half of the year, Abate said, but she hoped the game against Dover-Sherborn, even though it was a loss, could serve as a springboard.

“It felt like a win for us just because of the change in the play,” she said. “The energy was up, players were hustling, they were fighting, it was amazing. It was really a great game, so I’m trying to keep the momentum going.”

Abate said she is excited for the program’s future, but she has not written off the rest of this year, either.

“We still have a huge chunk of the season to go,” Abate said. “And we are not giving up.”