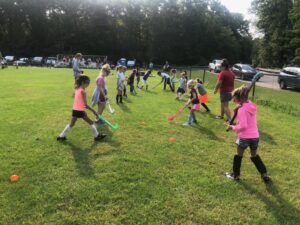 Participants in the Parks & Rec field hockey program work on their skills at a recent session.

Dozens of young field hockey players signed up for Hopkinton’s first fall clinic sponsored by the town’s Department of Parks & Recreation, exciting organizers who hope to grow the program even more in the years to come and develop a reliable feeder for the high school teams.

A total of 72 players ranging from kindergarten to eighth grade signed up for the six-week clinic, which runs on Sundays during September and October. The turnout was even more successful than the coaches who helped spearhead the effort had hoped to see.

“There was a need for a youth program for field hockey,” said Jenn Carter, a former high school player and one of the coaches. “Soccer is so big, but this gives kids another option to play in the fall. We thought it was important to introduce them to field hockey at a much younger age.”

Sharon Remsen, who has coached at the middle school and varsity level and played the sport in high school and college, also noticed that young Hopkinton field hockey players have had to take their skills elsewhere in recent years if they wanted to play the sport before getting to high school.

“There were so many programs in neighboring towns that our girls and boys were going to,” Remsen said. “We thought, ‘Let’s start something in-house and build a program here in Hopkinton.’ ”

The clinics are taking place on Field 10 at Hopkinton High School. The day starts with warmups, then the players break off into groups based on their age for more drills, scrimmages and other activities. The focus is on teaching the basics, including dribbling, passing and shooting, and to make sure the time spent playing is fun and leaves players wanting to come back for more.

“We have had a lot of great feedback,” Carter said. “The kids were excited to be there and excited to come back. My daughter said it’s her favorite sport after two days. I think they are really enjoying it. Field hockey is a really fun sport, and it’s something different for them.”

In addition to Carter and Remsen, the clinics are being led by Meghan Carlisle. A three-year captain at the University of Rhode Island, Carlisle has extensive collegiate coaching experience and trained as a player with the national team. She has also been able to involve members of her family who have deep coaching resumes.

“These kids are getting some really good instruction,” said Colleen Allen, the program coordinator for Hopkinton Parks & Rec.

Allen said it usually takes a year or two for a program to really catch on, but field hockey has been the exception. One reason is that the Hillers’ varsity coach, Becky Abate, has been firmly behind the effort and has recruited her players to help out with the clinic.

“We’ve seen it in soccer and with lacrosse, it’s really the coach that has to get involved to make it happen,” Allen said. “Connecting the youth with the high school program is awesome. The younger kids can emulate them and the older kids like to be role models, it’s a win-win.”

Abate said that not having a youth program until now is something that has negatively affected the high school team.

“We have little Hillers coming up,” she said. “That’s exciting.”

Remsen said the short-term goal is to keep the kids who have already signed up wanting to come back. In the future, she said it would be great to have enough players for one team per grade level and maybe set up a league where Hopkinton could play teams from other towns. She admits it’s not something she had thought about until she saw the huge turnout at the inaugural clinic.

“I think we are a little overwhelmed with how awesome it’s been,” she said.