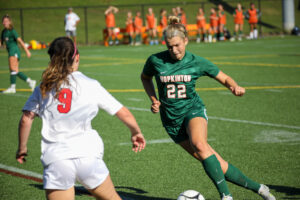 Sophomore Brooke Birtwistle has played a key role controlling the midfield for the Hillers. PHOTO/JOHN CARDILLO

The Hopkinton High School girls soccer program has taken pride in recent seasons on being a possession team that keeps opponents off the scoreboard. The Hillers bring that facet of the game to the field this fall, but coach Tom Skiba is also hoping his squad can score more often than it has in the past.

“Our ability to score goals is something that’s a little different for us this year,” Skiba said. “Realistically, I think we could score two-plus goals per game. That’s been our goal in the past, and since I have been the coach we have come close to that, but we have multiple players this year up front and in the midfield who can put the ball in the back of the net.”

The goal, he said, is “to be a possession team that can also put some numbers on the board.”

Hopkinton started off this season with a loss to Medfield but bounced back with wins over Norwood, Holliston, Ashland, Walpole and Westwood. The Holliston game was that program’s first loss in more than two seasons.

“It was absolutely a huge, emotional boost for us,” Skiba said. “It’s a long haul going 18 games, but certainly that gives our kids a ton of confidence.”

Sophomore Georgina Clarke has been an early bright spot for the offense, scoring in each of the team’s first four games. Three different players scored in the win over Ashland.

“That is another huge confidence boost for the team,” Skiba said. “Knowing that, in any situation, we have several players who can put the ball in the back of the net.”

But Hopkinton also is staying true to its roots as a possession-based team. Sophomore Brooke Birtwistle has been patrolling the midfield and helping to control the tempo of the game, her coach said.

“It’s not always going to show up on the stat sheet, but when we lose the ball Brooke is absolutely instrumental in helping us get organized and regain possession of the ball,” Skiba said. “She has been doing a fantastic job for us.”

A quartet of senior captains are helping to lead the way this fall. Gabriella Ciri and Riley Krattenmaker are both experienced center backs, while Ashley Butler and Ava Perlov are in the midfield.

“We are getting great leadership from them as captains, but I have to tell you the seniors overall are really helping to pick up the younger players and underclassmen,” Skiba said. “It’s a good group in terms of the cohesiveness of the team. It takes everyone to participate, and we are getting there.”

They also are helping to lead the team in a more normal season after the COVID-19-impacted campaign last year. Skiba said it is good to be back playing the normal schedule and renewing rivalries that were interrupted in the fall of 2020.

“The majority of these girls play on club teams so there are a lot of good individual rivalries that go on,” he said. “It’s good to see those things back and to play under a normal set of rules.”

Skiba said the Hillers are aiming high, hoping to win the Tri-Valley League and quality for the state tournament.

“Those are the goals we strive for every year,” he said. “We have a whole set of process goals that should hopefully lead to that outcome.”