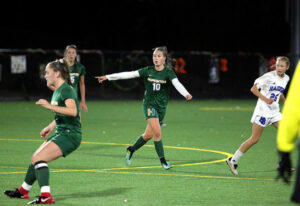 Senior Meghan Sullivan returns as a captain and a leader of the Hillers’ stellar defense.
PHOTO/TRICIA LACASCIA

The Hopkinton High School girls soccer team left itself a tough act to follow after claiming the first sectional championship in program history a season ago, but new coach Tom Skiba has been impressed by his team’s efforts to build after last year’s successful run.

“Not to steal from Bill Belichick, but we are trying to take this one game at a time,” Skiba said with a chuckle. “I have used different lineups for our first few games and we have had different defensive approaches and attacking approaches for each game.”

Mixing things up has a couple of benefits, Skiba said, including keeping opponents guessing and helping his own team develop depth at various parts of the field.

“We are building up our team and the approaches we can use as we run into increasingly tougher competition,” the coach added.

Defense was a hallmark of the Hillers last year under Wayne Sygrove, and Skiba noted how strong the foundation of this year’s team has shown itself to be. Hopkinton allowed a single goal throughout the entire postseason run and did not permit a tally though its first two games of the 2019 campaign, a pair of shutout wins.

“It always starts with the defense,” Skiba said, “and we are very strong across our back four.”

Hopkinton returned most of its defense this year, and senior Kate Lagasse has stepped in to fill one of the spots vacated by a graduated senior. Junior Kristen McCluskey has stood out in her first year as the full-time starting goalie.

Senior leadership also has been integral to Hopkinton’s hopes of repeating as Tri-Valley League and South Sectional champions.

“The seniors have taken a great leadership role,” Skiba said. “The captains and all of the senior class in terms of creating a fun environment where people are giving 100 percent effort every day.”

Olivia O’Connor and Meghan Sullivan are two captains who are going to be counted on to solidify the defense and the defensive midfield. Allison Bird, the 2019 squad’s third captain, will be on the attack. Hers is a part of the field Skiba wants to get more from this fall.

“One thing we would like is more people scoring more goals and that has been a focus of our initial training — how do we get more players involved in the attack and generating more shots on net, which hopefully leads to more goals,” Skiba said. “We are really building on our attack and trying to highlight our strikers.

In addition to Bird, Delaney Mick and Meredith Cesnek will be crucial when it comes to scoring goals, the coach noted.

Skiba said he is focused on the TVL first and foremost and will worry about competing with the other powers in the area once the sectional tournament rolls around. Medfield and Holliston are the key competitors in the TVL Large School Division, he said, while Medway and Dover-Sherborn will be among the teams to beat in the TVL Small School Division.