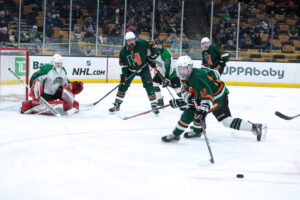 Hopkinton’s Kyle Rogers (12) pursues the puck as teammates Tommy Hamlet (19) and Sean Walsh (11) look on during the Hillers’ 3-2 loss to Wachusett in the Division 3 state championship game at TD Garden on March 17.
PHOTO/TRICIA LACASCIA PHOTOGRAPHY

The genesis for the Hopkinton High School hockey team’s historic run to the Division 3 state championship game at TD Garden on March 17 — which culminated in a 3-2 loss to Wachusett — took place on an island off the coast of Massachusetts on a mid-February weekend.

“Our last two games of the [regular season], we played in the Martha’s Vineyard tournament the first weekend of vacation and the kids just really bonded down there,” coach Chris MacPherson said. “I felt like that really springboarded us into the [state] tournament.

“We won that tournament down there, we beat two teams that are ranked higher than us — just like every other team we’ve faced since then. Once we won that, I said, we can make a run here. For an 11th seed to make that push, it’s just an incredible run for these kids.”

What made the drive to the team’s first-ever appearance in the state final even more impressive is that the Hillers’ depth — and psyche — was tested after eight underclassmen were suspended from the program following a social media incident in early February.

“We had a meeting with [athletic director Dee King] at the high school before we went to the Vineyard,” recalled junior forward Sean Walsh, the team’s leading scorer. “She sat us down and said that she was very proud of us, the way we came back from the situation that happened. Our coach spoke very highly of us. He said to turn it around we’re going to need everyone in this room to step it up. We worked harder at practice. We communicated better as a team and we all got closer when we needed it, and it took us all the way to [TD Garden].”

The underdog run fell one goal short of glory, as Wachusett skated off with the title in a hard-fought game that drew about 1,000 Hopkintonians to TD Garden. Juniors Will Quinlan and Kyle Rogers scored for the Hillers (16-8-2), but an offense that had erupted for 28 goals in five previous playoff games was held in check by a stingy Wachusett defense. Hopkinton, twice behind by two goals, outshot the Mountaineers 26-20 but could not break through.

“They popped a good goal in the first period,” senior captain Stephen Simoes said. “We went in the locker room and we just wanted to open the floodgates after that, and obviously we were never able to. But we did all we could.”

En route to the Garden, Hopkinton won its first-ever South sectional title with four straight wins over higher-seeded teams, including a 6-2 victory over Ashland in sectional final, then knocked off Lowell, 6-3, in the state semifinals behind four goals from Walsh.

“It’s just a special group of guys who really believe in each other,” said MacPherson, who credited Simoes’ leadership. “We don’t have a very big roster, and these guys every single day just kept coming to the rink believing in each other that they were going to win hockey games.” 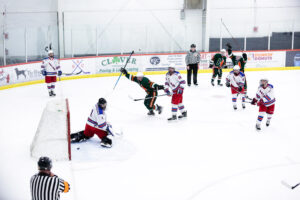 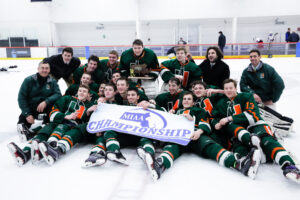