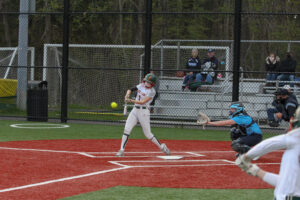 Senior Kristin McCluskey, like the team’s other two captains, has been with the varsity since her freshman season.
PHOTO/JOHN CARDILLO

Having a forced year away from the sport they enjoy so much has given the players on the Hopkinton High School softball team a new perspective, and that energy has been palpable through the early days of the team’s time together this spring.

“The girls are really excited to be back and they are bringing this energy that is so good,” said coach Shannon Allberry-Yerardi. “It wasn’t there the last time we played, but it’s been really positive and really great to see.”

This is a different kind of spring season for the Hillers. It started later than normal and it will be condensed into barely six weeks. There is no win-loss requirement for making the tournament — Hopkinton and every other team in the state will have the chance to compete in postseason play at the end of the regular season.

“It’s both strange in that I only knew six of the girls who came out for tryouts, and the last time we all played together they were freshmen and sophomores, so that part has been strange,” Allberry-Yerardi said. “But it was also really refreshing because I didn’t have any expectations for how good a team we really had and neither did they, it’s kind of like a blank slate.”

So far, Allberry-Yerardi said her team seems willing to help one another on the field as the team learns new positions and new teammates. Hopkinton’s three senior captains have been especially important when it comes to getting the team on the same page heading into the season.

“They are the biggest influences on the rest of the team in terms of work ethic and how they approach the game,” Allberry-Yerardi said.

Tara Kester, Kristin McCluskey and Siena Harrigan will serve as team captains this year and play shortstop, third base and second base, respectively. They were all varsity players in 2018 as freshmen, meaning they have been with the program even longer than their coach.

McCluskey is expected to hit at the top of the batting order, Kester will be in the middle of the order, and Harrigan can produce from any spot in the lineup, Allberry-Yerardi said.

Although the coach did not know many of the players who came out for the team this year because the 2020 season was canceled, several newcomers have stood out. One such talented rookie is sophomore Caroline DeSimone, who will start in center field.

“She is really fast and she understands the game at a deep level,” Allberry-Yerardi said.

With a spot in the postseason guaranteed, Hopkinton — which opened the season 2-0 by routing Westwood and Medfield, scoring 38 runs in the process — is going to be focused on taking things one game at a time and improving steadily throughout the course of the season. Allberry-Yerardi said she wants to make sure everyone has a chance to get some experience both at the plate and in the field.

She is also hoping the feeling of gratitude for getting the chance to play is not something that will go away any time soon.

“I really want them to approach every ball hit to them and every at bat as if the game were on the line so they are giving their best every single time,” Allberry-Yerardi said. “We didn’t get to play last year and they understand playing athletics is a privilege and we don’t know what next week is going to hold. I think they’ll give it their all because they know what it’s like to not be able to play.”

← Meet the candidates for 2021 Town Election Arrests/Police Log, May 18 edition →