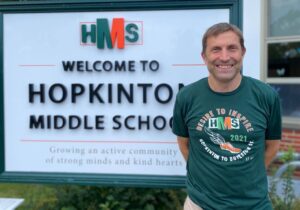 Hopkinton Middle School Principal Alan Keller is running the Boston Marathon to raise funds for the Desire to Inspire program.

Principal Alan Keller has been running Hopkinton Middle School for the past 12 years. Now he is running — literally — in the Boston Marathon to support his school’s Desire to Inspire program.

Keller first ran the race in 2012, the year before the marathon bombing. He became familiar with the event after meeting his wife, a Newton native, years before and moving to Massachusetts about two decades ago. He watched the race on the sidelines with his family, both in Newton and once at the finish line.

“I enjoyed that experience a lot,” said the Holliston resident, noting that he likes to run but does not do so competitively. “However, once I finished it, I said, ‘I am glad it’s complete and I will never do so again.’ ”

His perspective changed as he became more involved in the Hopkinton community and knew several teachers who had ties to the race.

“After the bombing [at the finish line in 2013], we wanted to do something that would pull the marathon back into a positive light,” Keller explained. “We need to honor that and remember what happened on that day, but we wanted to reestablish that positive connection to the marathon that we, being in Hopkinton, have been able to enjoy.”

He and a team of teachers worked on a curriculum that became the foundation for the Desire to Inspire program. Lessons in social studies and English focused on the spirit of the event as well as themes such as endurance, leadership and tenacity. Several guest speakers engaged students, including John Young, a marathoner with dwarfism.

“He’s come a few times to speak about what the marathon meant to him and his experiences growing up,” Keller said. “It was a message about persistence but also about differences. Many of our students had never spoken to someone like John.”

“We intentionally don’t just have athletes,” Keller explained. “We wanted to draw inspiration from a number of different experiences.”

For a couple of years, the program also included a school-wide 5K race in which students could participate as runners, walkers or supporters cheering for their classmates.

“It was a really powerful moment for our school community,” Keller said, “both to see kids crossing the finish line doing something that they had never done before as well as those cheering others on.”

Desire to Inspire also has a connection with the Alpha Omega Council. Students participate in an essay contest where they reflect on the traditions of ancient Greece and how the lessons of the marathon connected to their lives. Winners are invited to the Statehouse, where the honors chorus sings at an evening event.

COVID-19 temporarily halted the initiative. Through Keller’s fundraising by running in the marathon he hopes he can help it return, and there are plans to bring it back next year.

“We definitely felt like we needed to bring some inspiration and some fun back to school life, especially after last year,” he said. “It was hard for the middle school students because they had to sit in the same classroom because of the COVID restrictions.”

The money raised will be used to pay guest speakers as well as to contribute to programming. In the school’s previous 5K events, funds were used to purchase bibs and T-shirts for participants.

This is not the only race in which Keller has participated for charity.

“My friend had a heart transplant back in 2000,” he said. “The transplant organization was doing a 5K in Philadelphia, which is where he got the transplant. My wife and I wanted to do whatever we could to help.”

Since then, he had run other races but became really motivated when he moved to the area.

“I had never ventured beyond running three or four miles,” he said. “But once I came here, I was inspired. I connected with the Hopkinton Running Club and began training for that first marathon. I was able to finish it, and I received a lot of help and support along the way.”

Recalling the grueling nature of the race, Keller remembered the temperatures being in the 80s, as well as the feeling of triumph as crowds cheered when he crossed the line and all along the route. He has been training for this year’s contest by running through Hopkinton and Sherborn, adding an additional mile to the routine each Saturday.

In addition to Keller’s fundraising (givebutter.com/qIpzFO/alankeller), a seventh-grade student named Dee Halliday designed and created a T-shirt, which can be purchased for $25 to support Desire to Inspire at facebook.com/deestees2016.

Keller noted he always has had a passion for teaching, but his personal journey led him along a longer course. A guidance counselor steered him away from education, encouraging him to pursue a degree in journalism from West Virginia University, while he was working as a radio station DJ. After employment in journalism and sales, the western Pennsylvania native decided to pursue his true passion, earning a master’s degree in education from the University of Pittsburgh.

Keller said he appreciates the support he has received in Hopkinton and relishes his position, even after the difficulties the pandemic presented.

“It’s always challenging,” he said. “Every year you have the opportunity to get a little bit better and work with the community. You start each year with a clean slate.”