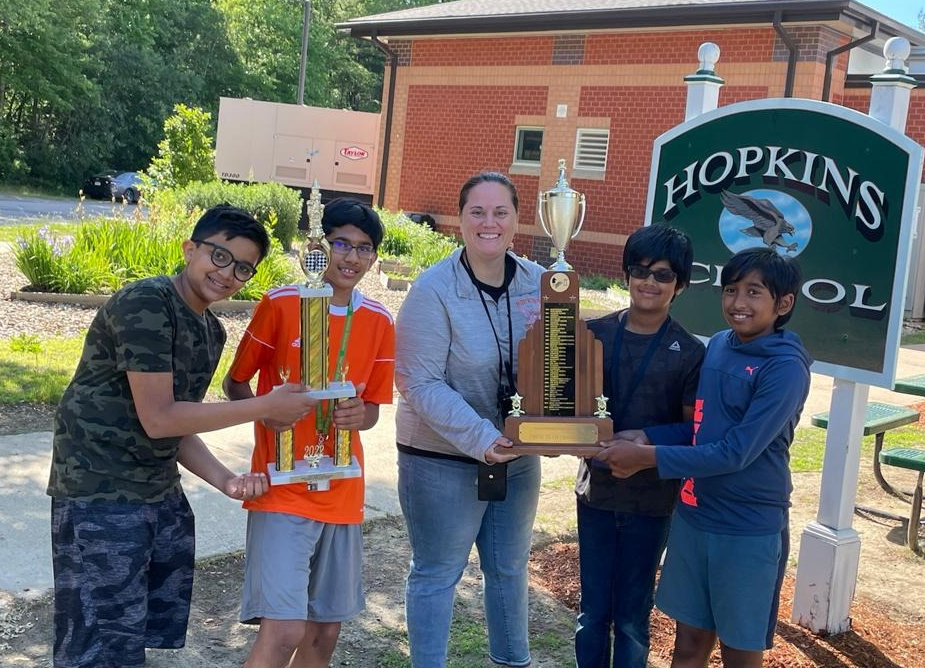 For the first time ever, a team from Hopkins Elementary School won the Hurvitz Cup State Scholastic Team Championship, a chess competition run by the Massachusetts Chess Association.

The team representing Hopkins consisted of four fifth-grade boys, Dattasai Kilari, Dhairya Mehta, Jashu Reddy Ambati and Karthik Lakshmanan. Dhairya’s mother suggested that the boys form a team. Each member played someone of a similar level, and the Hopkins team, playing in a division for kindergarten through Grade 5, did not lose a single match.

Playing in chess tournaments was not a new experience for any of the team members. Individually, they have competed in over 400 tournaments.

Kilari started playing competitively at the age of 6, and he has competed in over 200 tournaments. In the Hurvitz Cup, he was first board for the team. First board refers to the team member with the highest rating, and they play the highest-rated member on the opposing team.

Lakshmanan, who recently moved from Alabama, is just beginning to play in tournaments.

“I started just casually playing at 4 and playing in tournaments at 10,” he explained.

Kilari, Mehta and Ambati have been to many of the same tournaments, and Kilari and Mehta often compete against each other. Mehta previously lived in Newton and knew Kilari and Ambati from chess tournaments before they started attending school together.

“[Kilari and Mehta] have competed like a million times,” said Ambati.

Asked if they had a rivalry, Kilari and Mehta looked at each other, smiled and said yes. However, their competition does not stop them from hanging out together.

“We are all friends,” said Kilari.

Kilari and Mehta both use the same chess opening, the Caro–Kann Defense, in tournaments. Ambati likes to open with the Sicilian Defense, while Lakshmanan prefers the Modern Defense.

Kilari and Lakshmanan look up to the same chess grandmaster, Hikaru Nakamura. Ambati aspires to play like Rameshbabu Praggnanandhaa, while Mehta’s chess hero is Viswanathan Anand.

The team members started playing chess after their fathers taught them the basics. For this tournament, the team did not have a coach. They practiced before the tournament by playing against each other, playing online and analyzing their mistakes.

The result of all that practice was confidence going into the tournament.

“We were not nervous at all,” said Mehta. “We had worked together improving our own skills.”

The two trophies won from the tournament were handed off to Hopkins principal Vanessa Bilello for display in the school.

One of the trophies the school gets to keep forever. Hopkins will give the other trophy to the new champions next year.

The team plans on competing in the Winter Team Challenge later this year. It’s a tournament that Kilari, Mehta and Ambati each have won before but on separate teams.

To celebrate their recent victory, the team planned on eating pizza and ice cream together.