By Linda Connelly
Special to the Independent

In late March, when we were dealing with a rising tide of new coronavirus cases, I sought solace in the past. Hopkinton had gone through an epidemic of influenza just following the first World War and had come out in one piece at the other end. It must have, because we’re all here today, right? How did the officials and residents of our town deal with that particular infection? What kind of a town was it in that year and under those circumstances?

As a librarian with a background in archival studies, I have browsed through Hopkinton’s archival resources for quite some time now. I hope to produce a picture with the little information I have from a library log book and from a 129-page Town Report of 1918.

The so-called Spanish flu of 1918 (the actual country of origin has never been determined) is considered one of the most deadly pandemics in human history, killing perhaps one-fourth of the world’s population. The 1918 flu pandemic and World War I happened simultaneously and certainly are connected. There were two outbreaks of the 1918 pandemic, the second considered more virulent. In terms of Massachusetts, the second reappeared in September 2018 at the Boston Navy Yard and at what is now Fort Devens in Ayer, specifically killing young soldiers.

Hopkinton was a town of approximately 2,300 people (compared to 17,800 in 2019). Apparently the influenza virus reached Hopkinton in September. The sole librarian, Caroline Wilbur, recorded some details about the library’s reaction to the outbreak. The library was closed for nearly three weeks and books were not loaned to persons who had the illness.
“Books are not allowed to go where there are cases,” she noted. Wilbur indicated that books returned to the library by known sick persons were “fumigated” and, thank goodness, out of compassion all fines, two cents per day, were forgiven.

The Annual Report of the Town of Hopkinton provides a potentially expanded view of events. The War to End All Wars was in its final year. Hopkinton sent 111 young men, and three had died. The Annual Report tells us that two individuals died from influenza, however I had to consider the Town Clerk (Patrick Dolan) recorded an additional seven people dying of pneumonia. I question how in 1918 they were able to tell the difference between the flu and pneumonia.

Life in Hopkinton was hard — 52 people were buried in the town that year, including six children under 5 years of age! People’s lives were much more at risk than ours are today in spite of COVID-19. Children were especially vulnerable; this was something that became evident and stunned me while I was adding information to a library spreadsheet listing cemetery records. This was only 102 years ago and it was not uncommon for children to die — three under age 5 died the following year, in 1919.

Town focus was on WWI

A large part of the Annual Report from 1918 dealt with WWI. After paragraphs of patriotic rhetoric, discussion in the report abruptly and seemingly out of context shifts to a paragraph referring to the flu.

“During the latter part of the year a large number of our citizens were stricken by the epidemic, Spanish Influenza, the Board of Health had to take extraordinary measures to relieve suffering and prevent the spread of the disease,” it reads. There are no specific details in this paragraph but it noted that the Board of Health’s account went over budget by $625.

A point of interest involves the payment of “wages” by the town to several individuals in “quarantine.” The names are as follows, and these people will be researched via Ancestry.com: John Sellar, Walter F Kimball, X.J. Rollins, C.N. Linnell, Bernice Sweet, Angelo Cardesso and Harry Hamilton. All were paid a single sum of money, generally $22-$24 per payment.

However, John Stanley McIntyre of Pleasant Street, aged 22, likely died of the flu. His more lengthy obituary indicates that he was “the last Hopkinton young man to enter the service” and died at Fort Andrews in Hull on Nov. 6, 1918. McIntyre was buried in town at Mount Auburn Cemetery. Looking closely at individuals makes this all real. Like many other young men of that time he contracted the disease at a WWI camp. 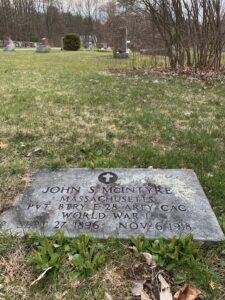 John Stanley McIntyre apparently contracted the flu while training for World War I at Fort Andrews in Hull and died on Nov. 6, 1918. His grave is located in Mount Auburn Cemetery. PHOTO/JERRY SPAR

A second young man named Stephen H. Pond had parents who retired to the bucolic location of Hopkinton. Stephen died at Fort Devens in Ayer, and his cause of death was stated as influenza. The Ponds remained in our town for some time following the premature death of their son.

What we know is that at least two young men died, both victims because of their WWI exposure to the illness. In addition, a 16-year-old girl was paid by Hopkinton for “nursing” and six people were paid to remain in quarantine, at least three living in households on Grove Street. Schools were closed from Sept. 22 through Oct. 23, as was the library. Druggists were paid to “fumigate.”

The quarantined likely were bored and anxious in varying degrees, as we all are in 2020. Unlike today, death and illness were not necessarily unusual occurrences in the town of 2,450. We can only imagine reactions and attitudes toward the disease as it became overshadowed by the latter stages of World War I and attitudes toward that global situation. They made it OK, and so will we.

By 1919 the influenza epidemic disappeared. There is no mention of it in Hopkinton’s Town Report other than one woman being paid while in quarantine. There were parades, banquets and celebrations for the boys who fought, but there was no local celebration for the end of the epidemic in the country and the world. Perhaps they just collectively let out a sigh of relief.