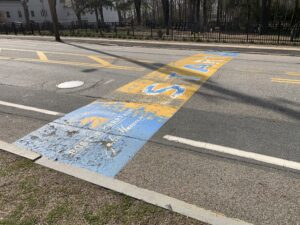 In 2021, for the second straight April, the Boston Marathon starting line on Main Street will be quiet due to the COVID-19 pandemic. PHOTO/JERRY SPAR

The recent announcement that the Boston Marathon would not be held on its traditional mid-April date for the second consecutive year was disappointing news for Hopkinton — where the race begins and provides a spiritual and financial boost — but it was taken in stride by those who saw the way things were trending with the COVID-19 pandemic.

Resident Lauren Melton was hoping to run her first Boston Marathon this past April only to see it called off a few weeks before participants were to head to Main Street for the start.

“I kind of saw that it was coming when things globally were moving in the wrong direction,” she said. “There were probably a lot of people that were pretty far along in their training, so they could have made the decision a little earlier. But I think they also wanted to do everything they could to maintain it, so they didn’t want to call it too early in case things started to turn around. But when it eventually came I was fully expecting that it was going to be postponed.”

Melton did run the “virtual” race — completing 26.2 miles in and around Hopkinton in September while raising close to $4,000 for the Hopkinton PTA — and while the experience was nothing close to what it should have been, she enjoyed it nonetheless.

“I did it in a great time and I had a few people along the way who cheered me on, then I had like a neighborhood welcome crew when I got back to the house,” she recalled. “So it was pretty cool, it was still pretty special.”

So while she again was disappointed that she won’t get to toe the starting line on Main Street in April with some 30,000 other participants, she appreciates that the decision was made so far in advance.

“I think it was wise for them to do it early because I think just based on where we are with the trajectory, the status of cases and the status of having vaccines, I just don’t think that we’ll be where we need to be to host something like that,” she said. “And I would prefer that they do something more inclusive at a time that’s more appropriate. Because I think if they had maintained it in April it probably would have been limited to elite runners, like a few other big races did this year. There’s such a huge component of the Boston Marathon that’s for fundraising. If they had kept it to only the elite runners, all the charities would have been left in the wake with nothing.

“So I like that they called it early. It helps people if they were planning on beginning their training early. And it leaves the door open for it to be a larger race later in the year.”

As the longtime chair of the Hopkinton Marathon Committee, which works with the Boston Athletic Association on aspects of the race at it relates to Hopkinton, Dorothy Ferriter-Wallace supported the decision to postpone the 2021 race.

“We personally commend the BAA for making this announcement early,” she said. “I think everyone expected this given the situation, with the whole virus situation and no therapeutics or vaccine coming out. So I was not surprised, and I understand why they want to err on the side of caution. This has been such a truly unusual year.”

Ferriter-Wallace said the HMC has worked with the BAA over the years on a number of adjustments to the start — including time changes, wave starts and security enhancements following the 2013 bombing at the finish line — and the organization will continue that work whenever the race returns.

“I will be scheduling a meeting next month to go over some aspects,” she said. “I think the health and safety of the runners, volunteers and businesses, but more importantly how it affects Hopkinton, the residents of Hopkinton, will come into play as well.”

The Parks & Recreation Commission, which oversees the scheduling of events at the Town Common, decided at its Nov. 2 meeting to limit the number of permits it will award due to the COVID-19 pandemic.

“We want to try to deter any sizable crowds from gathering on the common,” commission chair Dan Terry said. “Given where we are, and with [Gov. Charlie Baker’s] new guidance, in the short term we decided what we want to do is discourage crowds, because I believe, and the commission believes, it’s the right thing to do until the rules go back to what they were. So, we’re not permitting events for the foreseeable future.

Technically groups do not need a permit to use the common, unless they are selling things or if they want to ensure they will be able to reserve the property for themselves.

For example, organizers of the weekend Trump campaign rallies held at the common last month did not obtain a permit.

“We don’t have a right to tell people they can’t gather in a public place,” Terry said.