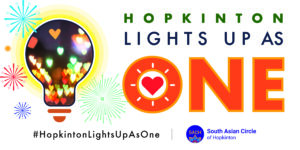 The South Asian Circle of Hopkinton is sponsoring a display called Hopkinton Lights Up As One, in which a variety of lights will be illuminated at the Town Common.

Editor’s note: This story has been updated with the SACH’s decision to postpone its annual fundraiser gala until the spring.

As turmoil and division continues to grow around the country, it has spared no community, Hopkinton included. But a two-year-old local nonprofit is trying to combat local divisions through messages of peace, unity and open conversation.

The South Asian Circle of Hopkinton, a group including Hopkinton residents with roots in India, Pakistan, Bangladesh, Sri Lanka and other countries, aims to build greater unity among Hopkinton residents. Its motto is, “Enriching our community through our collective strength and vibrant spirit.”

SACH planned to host two events before the end of the year in celebration of community diversity.

“There are some ideas that are sort of still being worked on,” SACH communications chair Charusmitha Ram said. “But every two or three days we are going to send different messages based on a certain color.”

For its second event SACH had hoped to host its annual gala fundraiser concert over Zoom on Dec. 12, but on Nov. 10 the organization announced that the event had been postponed until the spring.

Ram also asks for community members to light candles and lamps at home during the lights display, and to post pictures under the hashtag #HopkintonLightsUpAsOne in celebration of the year’s end.

Each day the team will send out different messages based around the letters in “Hopkinton.”

“We want to represent the values of this town,” Ram said. “We are very much aligned with what our Hopkinton stands for. Hopkinton basically was our inspiration.”

For example, the ‘p’ will stand for pride, and the event will include a three-day celebration of LGBTQ pride in the community. SACH is partnering with the Hopkinton Freedom Team (HFT), for which Ram serves as a board member, to foster LGBTQ support and positive messaging between Nov. 20-22.

The Hopkinton Freedom Team (hopkintonfreedomteam.org) prioritizes what member Freya Proudman calls a “transitional, transformative justice model” for addressing local incidents based in hate and bias. HFT members meet monthly to discuss how to support the entire community in its diversity, championing values of love, inclusion and trust.

SACH and HFT continue to work out the details of their collaboration. Proudman said supporting LGBTQ needs and rights to expression proved very important to her.

“Every week Freedom Team tries to have a different focus,” she said. “A couple of weeks ago was our focus on the LGBT community and trying to decide what we can do to lead the town forward.”

Proudman is currently writing her undergraduate dissertation thesis on LGBTQ rights.
“It’s a topic I love, a topic I’m very passionate about, and I think [Ram] saw that I really, really cared about this topic,” she said.

Continuing into next year, most of the events for the campaign Hopkinton Lights Up As One will center on themes of unity and open conversation of diversity. SACH has planned to work with the Hopkinton High School Diversity Club and will continue collaborating with the HFT as well.

SACH also continues its Conversations, Not Conspiracies campaign that began in August. The campaign prioritizes having open conversations rather than spreading conspiracies, holding an online gallery of local art pieces centered around this theme.

One of the initiatives under Conversations, Not Conspiracies is a scholarship program called Young Women in STEM, which awards $1,000 to a winning high school student wanting to pursue a career in science, technology, engineering and/or math.

When deciding how to celebrate, Ram said she was feeling unsettled by current events on the national and local levels.

She cited this past August when a Hopkinton resident rode his motorcycle around the Town Common during an India Independence Day celebration, revving his engine loudly and drowning out event speakers. The motorcyclist later apologized, saying he misunderstood how the American flag would be treated at the gathering.

“People were very hurt, the South Asian community was very hurt about what happened,” Ram said. “Things settled peacefully, and we came to a peaceful consensus. … But it did hurt the community, and so that’s one of the reasons we wanted to launch this campaign, because conspiracies really hurt communities.”

Added Ram: “The only way we can prevent that is by having more open conversations so that we can we can get to know each other.”

SACH seeks to represent the values of Hopkinton by bringing people of different backgrounds, religions and opinions together. Education through culture remains at the forefront of the nonprofit’s mission to unite people.

“Education through culture is a big part of it, and we’ve planned out a lot of fun activities for next year,” Ram said. “Based on all those things, we need to fundraise. … We’d love to have the whole community participate.”

“Pride is for everyone,” she said. “It’s really powerful when different groups kind of come together, especially groups of different minorities coming together to support one another.”