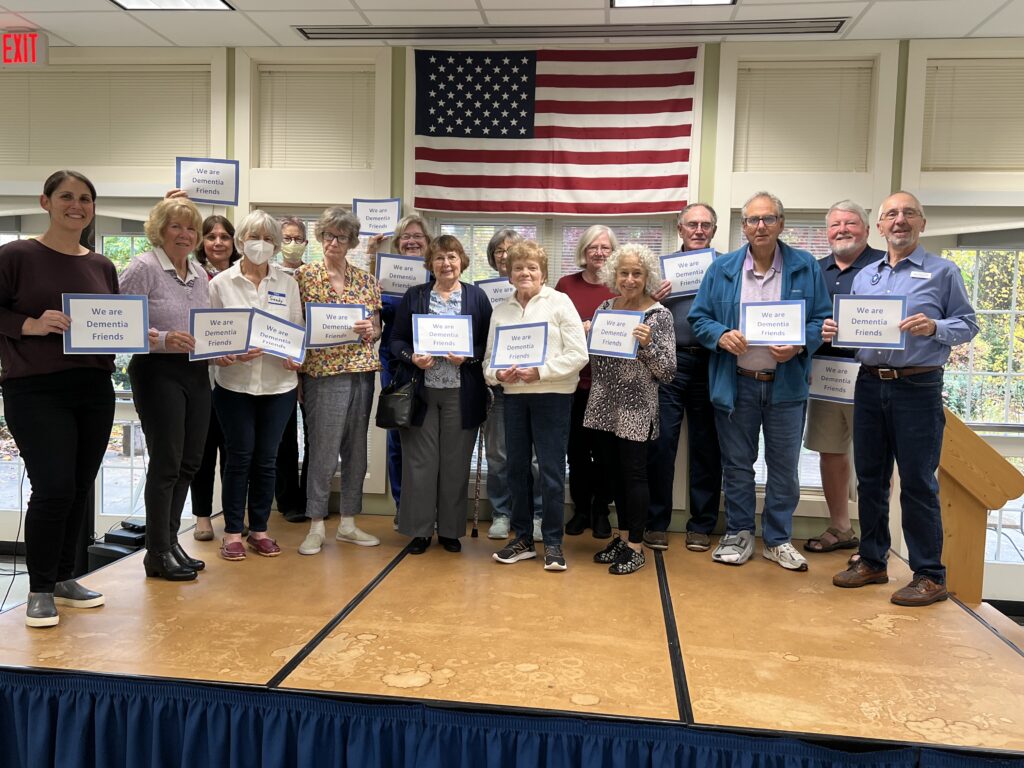 More than a dozen residents became Dementia Friends following an information session conducted in late October. They are among the close to 200 Dementia Friends in Hopkinton who, through the Hopkinton Age-Friendly and Dementia-Friendly Initiative, are working to make the community more supportive, inclusive and safe for all residents but especially those who are aging or living with dementia.

Hopkinton once again has proven it is a caring community. In the past 11 months, 100 residents have become Dementia Friends, helping the community become an even more welcoming hometown for every citizen but especially those who are aging or have dementia.

“We’re pleased with the response,” said Sam Docknevich, Hopkinton Council on Aging and Hopkinton Age-Friendly and Dementia-Friendly Initiative Action Team member. He noted the new Dementia Friends were the result of the six information sessions held this year. A seventh session will be held Dec. 7 at St. John the Evangelist Parish in Hopkinton.

“We are in the beginning stages of a marathon to make Hopkinton a dementia-friendly, age-friendly community,” said Docknevich. The multi-year initiative aims to make the town more supportive, inclusive and safer for those who are aging and those living with dementia and their caregivers.

Senior Services Director Amy Beck said while the town has reached out to those living with dementia for years with various supports and programs such as Memory Cafe, the specific effort began pre-COVID in late 2019. That’s when about 80 residents, including Hopkinton Senior Center, Hopkinton Public Library and Town Hall staff along with members of the community’s public safety departments became Dementia Friends. The town formed its Action Team last fall and signed a Dementia Friendly Massachusetts pledge in February. It recently received dementia friendly recognition.

“It’s all about everyone feeling a sense of belonging whether you are living with dementia, have another disability or don’t,” said Beck. “It’s about feeling part of the bigger community.” Docknevich added the effort “really aligns well with the town’s initiative of diversity, inclusion, equity and belonging.”

While the Action Team is encouraged by the response so far, the members would like to offer more information sessions to civic, social, business, faith-based and youth groups. “We want to get more community involvement,” said Docknevich. “We want to get more people engaged. …We want them to have their awareness of dementia raised.”

Said Beck: “Engagement doesn’t mean being on a committee. It can mean appreciating where people are, and learning how to respect the differences or challenges people are facing. … If you become a Dementia Friend, that is engagement.” Participation at all levels from becoming aware, being a friend, spreading the word or serving on a committee is welcomed.

As it has raised awareness, the team is discovering what the town is doing well and where it might have some gaps that need to be filled. A targeted action plan for Hopkinton will be proposed in 2023. “Some issues could be long term and more capital intensive like housing, while others could be short term and done relatively quickly,” said Docknevich.

“The first step is gaining support within the town of people who are willing to look at and do more on a daily basis. That is the ripple that will eventually spread throughout the community,” said Beck.

Added Docknevich, “We’re focusing on what else we can do to make Hopkinton an even better place to live for everyone.”

To learn more, attend the Dementia Friends Information Session on Wednesday, Dec. 7 at 7 p.m. in the St. John’s Parish Center, 20 Church Street. The session, suitable for anyone from middle school students through adults, is open to all area residents. Reserve a seat by calling the Senior Center at 508-497-9730. Any group interested in holding a Dementia Friends Information Session is  encouraged to call the Senior Center and speak with Beck.