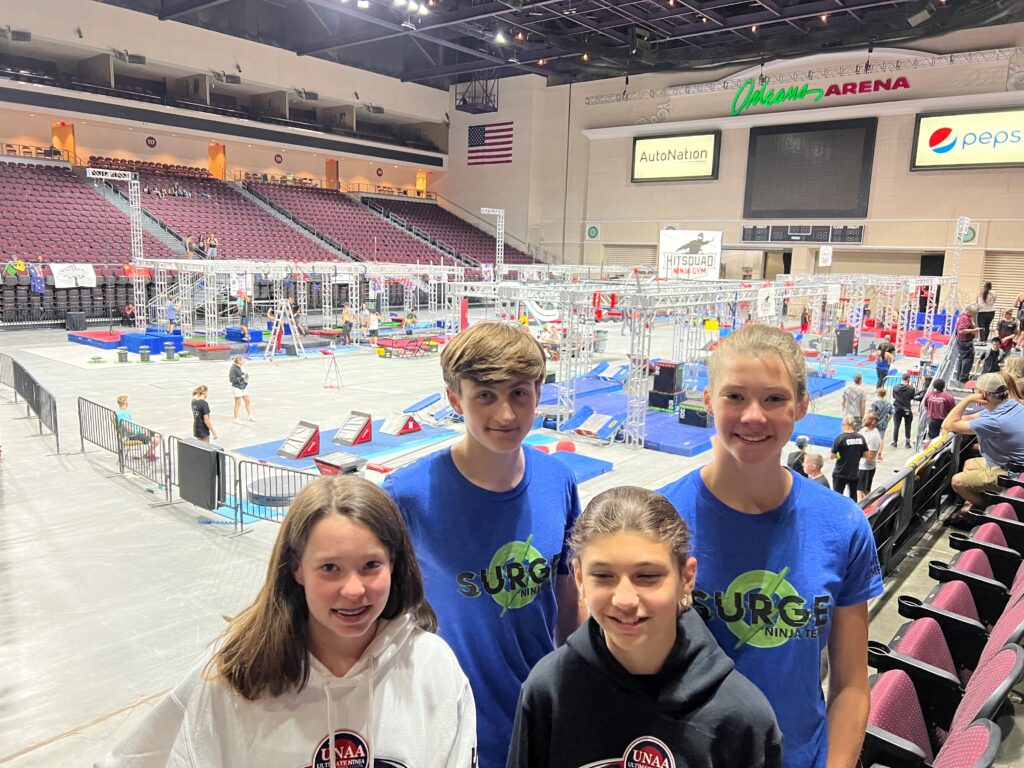 The group traveled to the Orleans Arena for the three-day competition, with Hopkinton residents Samantha Sweeney and Jackson Cafazzo competing in the 13-and-under division and Hopkinton’s Heather Sweeney taking part in the 11-and-under group along with Holliston’s Olivia Eramo.

“It’s interesting, it’s a lot different than other sports,” Samantha Sweeney said. “It’s like going to the gym, but in a better way, it’s more fun.”

Ninja competitions have become increasingly popular thanks to the television show “American Ninja Warriors.” Athletes attempt to complete an obstacle course and an array of different physical challenges, often leaping from one apparatus to the next in a display of strength, balance and precision.

Cafazzo said he enjoys the dynamic nature of the sport. He especially likes laches, when the athlete has to let go of the obstacle onto which they are holding and jump to the next, spending a period of time in midair.

“My favorite events and obstacles are the ones where you have to do big moves,” Cafazzo said. “There’s definitely things that are scarier than others, but it never gets to the point where I have to stop.”

All three of the Hopkinton athletes began competing in gymnastics with Kartwheel Kids before turning their attention to Surge, a ninja gym in Hopkinton. July’s national competition was the first taste of that level for both Sweeneys and Cafazzo.

“It was definitely a lot of fun,” Heather Sweeney said. “It was stressful because of how many people were there, and I had to overcome an injury.”

The younger Sweeney had suffered a fractured wrist while training, but she said it was not going to keep her from competition at nationals.

“No way,” she said. “I thought I could do it. I knew I had a chance to injure it again, but this was important to me, I had practiced for years for this.”

Cathy Sweeney, Samantha and Heather’s mother, said the girls train at least three days per week and practice at home, where the Sweeneys have installed rings. She said the training has helped the girls improve their strength, balance and athleticism.

“It’s amazing how much muscle they have gained,” Cathy Sweeney said. “They do a lot of pull-ups, and there is a lot of conditioning as well. It’s literally pushing your body to the limit through the whole course.”

Cafazzo has been training in ninja events for the past six years and enjoyed his first opportunity to showcase his skills with the best juniors in the country.

“Overall, the experience was amazing,” he said. “The community was great and the people there were super nice.”

Cafazzo said he wants to get back to nationals next year and maybe earn a spot on “American Ninja Warrior Junior” someday.

“The people who go on the show and are capable of doing all those things are the people who I aspire to be,” he said.

Like Cafazzo, the Sweeneys are taking aim at nationals again and hoping the year of experience they gained this time around will serve them well in future competitions.

“I think I did well,” Samantha Sweeney said. “I was happy with the score and placement that I got and I am going to continue to try to improve next season.”

Added coach Carter Hopping: “I am very proud of all my athletes who represented Surge Ninja. Their hard work and perseverance throughout the entire season earned them their trip to UNAA Worlds. They gave 110 percent on the Worlds course, exceeding my expectations. They are fierce, dedicated competitors to the sport of Ninja.”