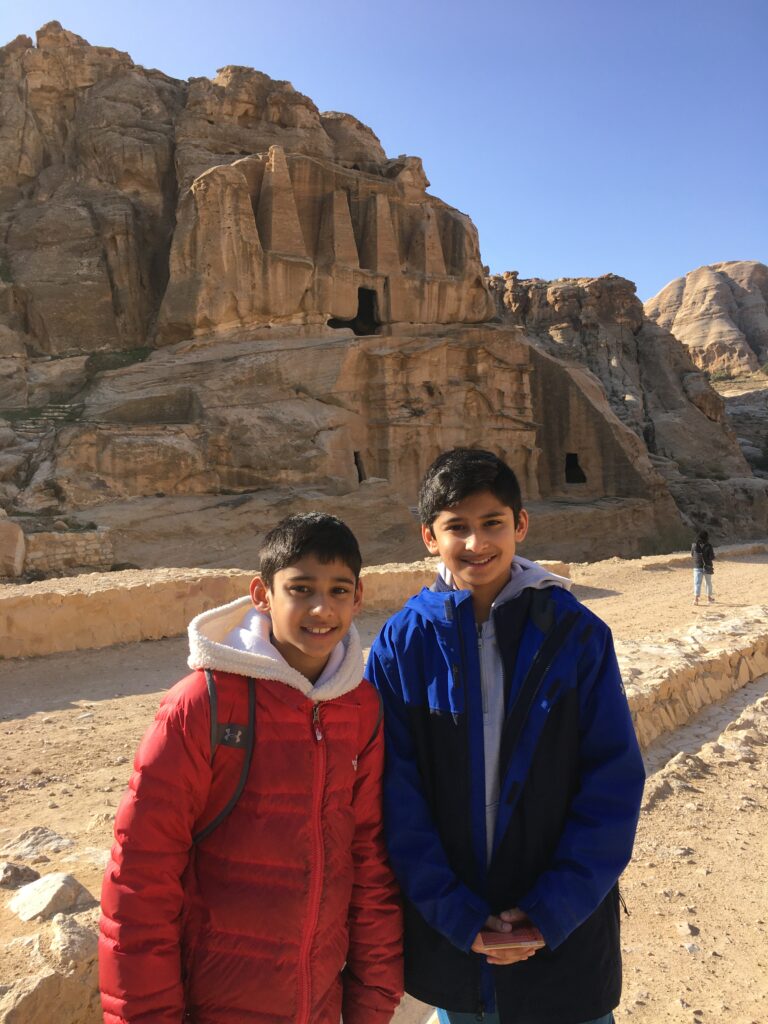 Arjun (left) and Aarav Mehta, shown during a trip to Jordan in February, have started a charity called ARM in ARM to provide sports gear to needy youngsters in other countries.

Having some extra time to spend at home is just what a pair of Hopkinton brothers needed to get their charity project up and running.

Aarav Mehta, 11, and his brother Arjun, 8, have been fortunate enough to see more than a dozen countries and nearly two dozen U.S. states thanks to their family’s boutique travel business.

As they experienced different cultures and saw many children their own age, they noticed that their peers abroad often did not have the same quality of clothing or sports equipment or school supplies that they have been able to take advantage of in America.

“We realized children our age don’t live the same way we do,” Aarav said.

So they decided to do something about it. The brothers started a charity called ARM in ARM with the goal of connecting children around the world by gathering new or gently used sports apparel, gear, and educational supplies and donating them to kids in need.

The name has a double meaning: it’s both the boys’ initials and captures the spirit of their charity, joining arm-in-arm across different cultures.

“Our plan is to do one large service project each year,” Arjun said. “And we’ll volunteer our time for smaller, local projects during the rest of the year.”

This summer, the brothers are planning to travel to Tanzania for a month, provided the COVID-19 pandemic has abated enough to allow for international travel. Their father, Rushik, grew up there, and the plan would be to spend a week or two doing volunteer work during the visit. He said the boys’ charity idea is one that has been percolating for a while.

“We came back from a trip to Jordan and Israel in February before COVID-19 really hit and the kids noticed there were less fortunate children there,” Rushik said. “They came home and said, ‘We have got to do something about it because we have been talking about it for a year.’ ”

On past trips, the boys had noticed children playing soccer in the streets without any shoes or going to schools and having to sit on the floor because they didn’t have proper desks and other supplies. When the pandemic left them homebound for an extended period of time, it provided the perfect opportunity to put their long-devised plans into action.

“I told them, ‘You have all this time at home and nothing going on except for your schoolwork, come up with something,’ ” Rushik said. “That’s how they devised this idea.”
Aarav and Arjun have a web page on their family’s travel website, CoddiWompleJourneys.com, and a hashtag #ArmInArm. They are collecting sports apparel and gear to bring on their first mission to Tanzania and are looking for people in Hopkinton and other local communities to donate athletic apparel, footwear, gear, equipment and other new or gently used items for both boys and girls.

Arjun noted how excited he and his brother get when Rushik and their mother, Kinjal, buy them new sporting equipment or school supplies.

“We want to make sure that less fortunate children get to feel the same way we do,” he said.

People who wish to donate can visit the website, email TheMehtas13@gmail.com or call 781-454-9883 to make arrangements to drop off their items or to have them picked up.

Rushik said the plan is for the boys’ charity to continue and tackle different projects through the years.

“I didn’t want them to do a project and just forget about it,” he said. “I want them to grow with the project.”