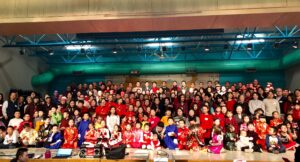 More than 250 residents turned out for the Chinese New Year celebration at Hopkins School on Feb. 2. PHOTO/ALLISON FU

Chinese New Year, also known as the Spring Festival, rings in the lunar new year in East Asia and is often considered one of the largest celebrations in the world. The fourth-year renewal of the holiday event in Hopkinton — held at Hopkins School on Feb. 2 — hosted more than 250 residents as well as distinguished guests, including Hopkinton Public Schools Superintendent Carol Cavanaugh, Board of Selectman Chair Claire Wright and Selectman Irfan Nasrullah.

Li Wang, one of many dedicated organizers of this event and president of the Hopkinton Chinese-American Association (HCAA), explained that the preparation took several months. Having meetings to choose the venue, assigning different tasks to volunteers, and advertising in the community were all aspects of the three-month long planning process.

“Each year, we try to do something different,” Wang explained. This year, the organizing committee added a traditional dragon dance to the program. The dragon dance, performed by the kids, was the starting act of the night. A group dance program was added at the end, with everyone asked to join the dance on the stage. Wang explained that this dance was meant to simply “celebrate and bring hope for the new year as a community.”

On behalf of the HCAA, Heather Chu, vice president, revealed that the purpose of the event was originally to bring together the Chinese-American community during the holiday. But this year the HCAA wanted to share its cultural heritage with the greater Hopkinton community as well. 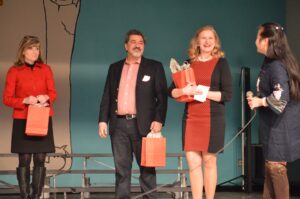 “We invited town and school officials to join us in the celebration and are planning to expand the program further to include more people in the future,” Chu said. “By doing so, we hope to promote participation and collaboration within the broader Hopkinton community.”

Nasrullah was pleased with the broadened impact of the event.

“The idea of expanding the diversity of Hopkinton and having a night like tonight where everyone comes together is what I truly love about this town,” he said. “This has been such a great opportunity to come together to celebrate Chinese culture.”

“There was a lot of talent up there tonight,” Cavanaugh remarked. “From the violin players to the dancers to the singers, there was just so much talent on the stage, and that is going to spread into the rest of the community. The kids are just so full of energy.”
Wang said the group wants to get more people in town involved.

“HCAA wants to continue to strengthen the Chinese-American community and at the same time deepen the connections with the rest of the town,” Wang said. “We plan to host more cultural events in the future in Hopkinton. We want to continue to have different people across different backgrounds to truly engage in Chinese culture as we continue to engage in theirs. We are a part of the whole Hopkinton community, in which we take pride.”

As Hopkinton continues to grow more diverse, Cavanaugh stressed that “it’s important to understand and embrace our differences. In the end, we are simply one community.”

Nasrullah concurred, saying: “What I really love is how the community is already embracing diversity. The town is eager to celebrate its own diversity and bring other people of diverse cultures in.”

Added Wright: “The mission of the HCAA is to promote participation and collaboration, and that really is just the essence of Hopkinton. There’s always been a real sense of community. I simply just love the town and the spirit of inclusion and community.”