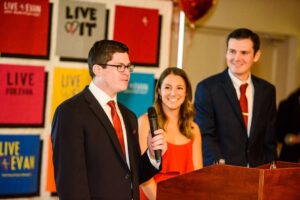 Live4Evan co-founder and president Jack Nealon addresses the crowd at the inaugural Red Tie Affair in 2018.

Supporters of a local charity will be seeing red on Saturday, March 2, as the second annual Live4Evan Red Tie Affair is held at Lake Pearl in Wrentham.

Last year’s event, which drew 200-plus people, raised about $30,000. That amount helped lease a one-bedroom apartment to be used at no cost by families traveling to Boston to support a child receiving cardiac care at Children’s Hospital or Tufts Floating Hospital.

“Every time we have an event, our goal is to gross the amount of an apartment,” Live4Evan co-founder/treasurer Shane Lavoie explained. “An apartment that we lease is typically between $30,000 and $35,000. So that’s our target when we have these events, and last year we were able to do that. It was a great success.”

The event, which runs from 7-11 p.m., features an open-bar reception, dinner, an auction and games. Tickets, which are $75 per person through Feb. 16 and $85 thereafter, can be purchased through the organization’s website: Live4Evan.org.

The theme is red tie because red represents the heart.

“People really go kind of wild with the red tie theme,” Lavoie said. “It’s a cool event, for sure.”

At last year’s event the organizers spoke about the group’s accomplishments and showed videos featuring interviews with families who have benefited from the charity.

“This year we have one of our families coming live to give a little speech about what the housing meant to them during their stay in Boston,” Lavoie said. “I think that should be a really cool feature this year.”

Sponsors include Equity Residential, which owns the building where Live4Evan leases space, and CORT Furniture, which furnishes the apartments at a reduced rate.

Live4Evan, which also puts on a road race in Hopkinton every October, is named for Hopkinton High School graduate Evan Girardi, who was born with a congenital heart defect and died from a heart arrhythmia shortly after the start of his senior year of college.

“He passed away in 2010, so it’s been several years since his passing, but I think based on the passion that myself and the other founders still have about the organization and the cause, and also our general supporters, that kind of shows what kind of guy Evan was,” said Lavoie, who was an HHS classmate and friend. “He inspired life-long loyalty. We want to try to create a legacy through him and have him live on through the families that we serve in our houses.”