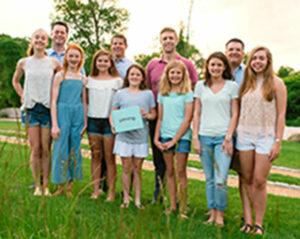 Four Hopkinton dads are hoping to start the conversation about a subject that is largely thought of as taboo — periods.

When Hopkinton resident Peter Thomas’ oldest daughter was about 10 years old, he and his wife started to think about the how to broach the “coming of age” talk.

“I realized I was pretty clueless on how to even start this conversation,” Thomas said. “It was awkward, but I knew that it was something that everyone in the world is affected by either directly or indirectly.”

Thomas started speaking to other dads who were in the same situation — a lot of daughters but not a lot of knowledge about how to talk to them about menstruation.

Realizing that there wasn’t a lot of information out there to help guide girls and their parents through this sometimes scary transition, Thomas, along with fellow Hopkinton residents Chuck Holden, Bill Cooper and Nick Balster, decided to create a product that would both educate and prepare girls as they moved into womanhood.

“It was about creating a movement with parents on how to talk to their daughters about something that is completely normal,” Thomas said. “And that conversation doesn’t include just girls. We want to raise a generation of compassionate boys that will turn into compassionate husbands.”

With the help of two award-winning pediatricians, Dr. Melisa Holmes and Dr. Trish Hutchison, several nurses and eight daughters between the four men, the Penny Pack was born.

The Penny Pack (thepennypack.com) is an introductory period gift that is designed to teach girls about menstruation before it happens and includes all the essentials that a girl needs “to feel confident and ready” for her first period.

“It’s important to talk about periods early so that when it happens, girls understand it is completely normal and part of growing up,” Thomas said. “We want our daughters to be thinking of math and science, and not worried or ridiculed if their period starts in the middle of class.”

The Penny Pack includes a small clutch that is fully stocked with 100 percent organic cotton tampons and pads that can discreetly be tucked away into a backpack. The Penny Pack also comes with two books — a copy of “Girl’s Guide,” written by Thomas’ 14-year-old daughter, Carmen, which is a candid guide that covers everything period-related including clues about associated body changes and hands-on tips for shopping and using pads/tampons, and “There’s Something New About You,” a book that enlightens and educates girls with honest information and useful advice and tips from Holmes and Hutchinson.

Recipients of the Penny Pack also have access to an exclusive mobile app for ongoing period-related information and educational tools.

The product was launched on May 28, which is national Menstrual Hygiene Day (MHD), in support of MHD’s mission of “creating a world where women of all ages are empowered to manage their period with confidence and without shame; and to break the silence, raise awareness and change negative social norms surrounding menstruation around the world.”

Since its launch, the creators have been hand-packing each Penny Pack “with love” out of their location in Hopkinton, and are already “blown away” by the positive feedback they have been receiving on a product that aims to help empower young girls.

“Hopkinton is a great place to start a business,” Thomas said. “People really care about each other in this town.”