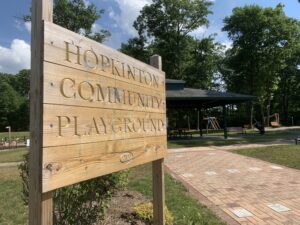 The playground sign at EMC Park shows only faint signs of the expletive that had been spray-painted there last week, as it was cleaned by volunteer Mark Mercer from Under Pressure power washing. The vandalism was discovered the same day racist and homophobic graffiti was found at Sandy Beach. PHOTO/JERRY SPAR

The past few weeks have brought out the best and worst in Hopkinton.

While many have banded together in an attempt to become more socially aware and fight bias and racial injustice, seeking to build on the burgeoning Black Lives Matter movement, others have shown this town has a lot of work to do to drive out insensitivity, discrimination and even hate from within its borders.

On June 23, the Hopkinton Public Schools sent an email to schools families addressing “offensive and racist comments on social media” by “a few” students from Hopkinton Middle School and Hopkinton High School.

“The racist posts underscore that anti-racist work must be bolstered within our schools and community,” read the HPS statement, which was attributed to superintendent Carol Cavanaugh, HMS principal Alan Keller and HHS principal Evan Bishop. “Throughout the summer and into the coming school year, we will challenge our school community and the residents of Hopkinton to take an anti-racist stand. Our hope is that parents and guardians will also choose not to remain silent. The schools and the community must stand together as partners to build a future for every child that is free from oppression, racism and bigotry.”

One day earlier, racist and homophobic graffiti was found at Sandy Beach. Police Chief Joseph Bennett said that an investigation was ongoing and no charges had been filed as of June 23.

The same day, graffiti was discovered at EMC Park, including an expletive that had been spray-painted on the playground sign.

On June 20, a Hayden Rowe Street resident who had a sign in her yard supporting LGBTQ+ rights reported to police that a note was left outside the front door of her home. While it was not written in a threatening tone, the letter indicated that, as a Christian, the writer took offense to the sign and requested its removal, claiming it “encourages bad things.” The writer included an email address, should the homeowner wish to learn “more about God.”

Meanwhile, local residents and businesses have responded to national events to show their support for change.

The owners of Resilience CrossFit on South Street started rebranding the company as Resilience Fitness in an effort to distance themselves from the national CrossFit brand. That’s because national CrossFit founder/owner Greg Glassman faced accusations of racism for insensitive comments he made about George Floyd, the Black man who died while being restrained by Minneapolis police, sparking protests across the nation. The comments prompted a closer look at Glassman, and it revealed a pattern of sexist behavior at company headquarters in Southern California. While Glassman eventually resigned in disgrace as CEO, as of late June he remained the owner of the company.

“It was pretty gross to hear about the culture this guy was fostering,” Resilience co-owner Brooks Farrar said. “It was kind of devastating, because so many good things are happening as a result of this fitness movement. But the guy at the head of the organization just isn’t a good person. So we needed to take a stand against this guy.” 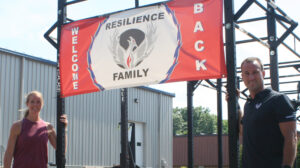 Co-owners Jamie Weeden (left) and Brooks Farrar rebranded their company as Resilience Fitness to downplay its affiliation with the CrossFit brand following the revelation that the national owner of CrossFit had demonstrated a pattern of racist and sexist behavior. PHOTO/JERRY SPAR

Farrar said there has been widespread support from the gym’s clientele, many of whom only recently returned to working out as the state has started to ease the restrictions on group gatherings.

“We made the decision [on the rebranding] pretty quickly, like overnight, and we didn’t really talk to our members before it, but it was pretty apparent that everyone agreed with it,” Farrar said. “We wanted to show support for the Black community, and then when the information about the sexist culture came out, we wanted to be clear where we stood on that.

“Now we’re going to wait and see if any changes are made that we can appreciate and see enough of a change to warrant going back under that name or not.”

There also has been a push to promote programs where residents can hear from people whose experiences have been different from the majority white population in town.

According to the Kirwan Institute for the Study of Race and Ethnicity, “Implicit bias refers to the attitudes or stereotypes that affect our understanding, actions and decisions in an unconscious manner. These biases, which encompass both favorable and unfavorable assessments, are activated involuntarily and without an individual’s awareness or intentional control. Residing deep in the subconscious, these biases are different from known biases that individuals may choose to conceal for the purposes of social and/or political correctness.”

Dawn Alcott, the director of Youth & Family Services, said she was approached by Mommying is Hard with the idea to start a discussion led by a person of color — and that wasn’t moderated on social media.

“We are grateful that they reached out to us,” Alcott said. “Definitely there is a need for this, to raise the bar on the nature of the conversation so that people are growing. We all have room to grow. None of us have this down when it comes to the impact of racism. We all have a lot to learn.”

Alcott said she anticipates — or at least hopes — lessons learned during the presentation will get passed down to children in the community.

“People will come back from this and have conversations at their dinner table and with their kids about how we treat each other and the legacy of what racism has cost us in the country,” she said. “It’s important that these conversations be had with kids so they can see and understand.

“Anytime change comes it stirs a lot,” Alcott added. “We struggle and we strive to do the right thing and do it well.”