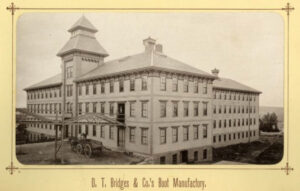 The D.T. Bridges Boot Manufactory, which was located on Main Street in Hopkinton, was founded by a descendant of one of the women accused of being a Salem witch.

By John Ritz
Special to the Independent

With the approach of Halloween, the city of Salem gets its annual spotlight because of the witch trials of the 1600s. Did you know there’s a Hopkinton connection to those trials? One of the accused was Sarah Cloyce. She was the daughter of William and Joanna Towne, and she married twice, first to Edmund Bridges, by whom she had six children, and second to Peter Cloyce, a widower, by whom she had three more children.

Along with two of her sisters, Sarah was accused of witchcraft and jailed. Her sisters were hanged, but Sarah escaped the noose (some accounts say she was pardoned, others say her husband broke her out of jail) and left Salem. She and her family relocated to Framingham, along with other folks from Salem, on what is now Salem End Road.

Sarah’s children (including the Bridges children) and their descendants settled throughout the surrounding towns, including Hopkinton. One of those descendants was Daniel Thurber Bridges, owner of the D.T. Bridges Boot Manufactory. A huge operation, it was a key part of Hopkinton’s role as a leading maker of footwear in the 1800s. When it was destroyed by fire in April 1883, it employed 600 workers. The site where it stood now is occupied by Bill’s Pizza and Middlesex Savings Bank.

The Hopkinton History Center, operated by the Hopkinton Historical Society, is located at 168 Hayden Rowe Street and is open on Mondays from 2-5 p.m. The center’s collection includes records dating as early as the town’s incorporation, along with photos, maps and artifacts.