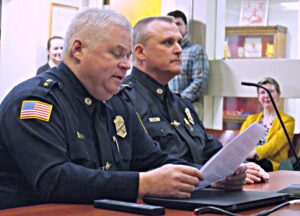 With Hopkinton in the midst of the coronavirus pandemic, there will be a change atop the town’s police force.

Chief Edward Lee submitted his resignation Tuesday and it was accepted by Town Manager Norman Khumalo “with a heavy heart,” according to an announcement from Khumalo. Lee will leave the force on April 3, after six years serving the town.

“He’s done a good job for Hopkinton, and I’m not sure what the next steps are for him,” Select Board member Brian Herr said in a phone interview Tuesday night. “We’ll probably have to look at an interim situation and go from there.”

Said Khumalo in his statement: “Chief Lee has been part of the town’s senior leadership and has led the Hopkinton Police Department with distinction — consistently achieving Hopkinton the ‘safest community’ top 5 rankings in the Commonwealth and the USA. “Under his guidance, the department expanded its force to address community growth, obtained certification (a step closer to full accreditation), completed its strategic plan, re-instituted the K9 program and expanded the SRO program.”

Prior to joining the HPD, Lee served on the force in Woonsocket. Rhode Island, for two decades. He started in 1988 as a patrolman and ascended through the ranks, eventually serving as captain of detectives for four years until his departure in 2012. He then got his master’s in criminal justice and law enforcement administration from Roger Williams University, where he also received his bachelor’s degree in the same fields of study. He joined the HPD in 2014.

Lee had his annual performance evaluation before the Select Board at its Oct. 8 meeting, and he received a rating of “clearly outstanding.”

His goals for the previous year were to partner with the town manager and fire chief to develop a community preparedness plan, finalize the process for HPD accreditation, and define the process for a 5-10-year strategic plan.

Lee explained that all of his goals were met, with full accreditation expected next year. He noted that morale in the department is very high based on an internal survey regarding job satisfaction.

“My view of Chief Lee in the last fiscal year is that he’s doing a clearly outstanding job because he is on the right path and he is making significant headway now,” Herr said at the meeting.

Added Select Board member Irfan Nasrullah: “We reviewed him last year, and I think he has taken the advice and taken the recommendations and ran with it.”

For the next year, the goals set for Lee were to develop a short-term strategic plan to assess the needs to ensure safety on the fringe parts of the community (trails, lakes, ponds, woods), complete the 5-10-year strategic plan, and identify a strategy to deal with traffic and construction issues caused by the Main Street Corridor Project.

Lee’s recent tenure was not without some controversy, as three officers sued the town and Lee and after the chief suspended their licenses to carry guns. The three officers — Peter Booth, Linda Higgins and John Moran — were on leave since suffering undisclosed injuries on duty on July 24, 2017.

Two days later, Lee sent letters to the officers indicating they needed to turn in all licenses, guns and ammunition to their local police station.

“You are no longer deemed suitable as a result of post-traumatic stress related to injuries incurred while on duty,” Lee wrote in the letters.

The officers filed appeals in February through attorney Kathleen Reagan, accusing Lee of retaliating against them and seeking to reinstate their licenses to carry without restriction. Hearings were rescheduled multiple times before Higgins filed a motion to drop her case on June 13 of last year and Booth did the same on July 17, waiving their rights to trial or appeal.

In September of last year, the three officers finally were approved for accidental disability retirement, and the town worked on settlements with them.