Select Board chair Brendan Tedstone on Tuesday sent a letter to Greek ambassador Alexandra Papadopoulou on behalf of the town, recognizing the 200th anniversary of Greece’s independence and commending the Greek-American community “for its contributions to the Commonwealth of Massachusetts and to the United States, and its role as a bridge between the two nations.”

Hopkinton’s relationship with the country is built around the Boston Marathon. At the race’s 1-mile mark, in front of Weston Nurseries, is a statue that honors Stylianos Kyriakides, who was a surprise winner of the 1946 race and a hero for raising awareness of post-World War II famine in his home country. The statue depicts Kyriakides being encouraged by Spyridon Louis, winner of the first modern Olympic marathon in 1896. A twin version of the statue is located in the Greek city of Marathon, which is Hopkinton’s sister city.

The Marathon Flame, a gift from the citizens of Marathon, is a continuously burning fire located in front of the Hopkinton Police Department. 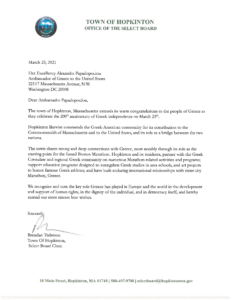