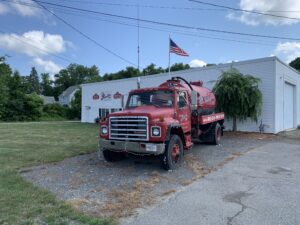 The J.C. Parmenter septic services company is 100 years old. It has been located on Hayden Rowe Street (across from Hopkinton Middle School) since 1972. It previously was located on property in the center of town that now is the CVS parking lot. PHOTO/JERRY SPAR

At 100 years old, J.C. Parmenter is the second-oldest company in Hopkinton (Callanan Cronin Funeral Home, at 131, is the oldest).

J.C. Parmenter was started in 1920 by Charles W. Parmenter and was first named C.W. Parmenter. Charlie lived at 16 Grove St. in Hopkinton, and the business was in the back behind a three-story apartment building owned by the Parmenters. There was a house on either side of Charlie’s at the time. They are all gone now, on land that now serves as the CVS parking lot. The only thing left there is Charlie’s picnic area in the middle of the parking lot.

Charles W. Parmenter, who lived from 1886 to 1973, started out as a young man with a team of horses and was a well digger. As time passed, town water was put in throughout the community, and the need for digging wells decreased. However, the situation presented a new possibility for Charlie. When people got town water, the wastewater was drained into the wells, and there became a need for pumping them periodically. Charlie took his dump truck to Andy Williams, a metal fabricator on East Main Street (where the limousine service now is located) and had him build a slide-in tank with a pump on it so he could pump out the cesspools. Charlie then started digging cesspools and later installing septic tanks and leach fields.

In 1940 Charlie bought two Federal truck chassis. One became a dump truck and one became a pump truck. As he told me, “The pump truck cost $100 more because it had a chrome radiator.”

In the mid-1950s Charlie turned the company over to his son, John, and it became J.C. Parmenter.

Around 1960 John sold half the company to the Irvine brothers, who at the time owned the Rambler dealership on Hayden Rowe, across from the high school.

In a couple of years the Irvine brothers bought the other half of the company. In the mid-1960s they bought two international KB-8 trucks from Reingold distributors and built a dump truck and pump truck on the two chassis. Mike, Albert and Joseph Irvine worked at the business.

In 1972 Joseph bought out his brothers and also the property on Hayden Rowe (Rambler had gone out of business) and moved the J.C. Parmenter Company to that location. Joe continued to run J.C. Parmenter until his death in 2013.

Joe’s daughter. Susan, took over the company and continues to run it to this day.

I worked for J.C. Parmenter from 1962 until 1975, both part-time and full-time. I drove the old Federal pump truck in its last days of service in the mid-1960s. It was quite an experience. On the front bumper I painted my name for it: “The Rough Rider” — and it was!

I took Charlie with me in the pump truck many times and was privileged to hear many recollections from him. He had a great memory, and when he began a statement with “I recall …” I knew I should listen up because I was in for another interesting bit of history about Hopkinton.