At last week’s Select Board meeting, the board addressed an issue raised by a resident regarding a traffic issue at Cumberland Farms on West Main Street, where a number accidents — including some serious ones — have occurred.

The results of the 2020 census were released Thursday, and it shows Hopkinton with a population of 18,758. That’s a substantial rise from the 2010 total of 14,925. The census also puts some specific numbers to Hopkinton’s growing diversity.

The American Legion and the Old Guard New England are planning a 9/11 Memorial Service at the Town Common on Sept. 11. The event will commemorate the 20th anniversary of the Sept. 11 attacks and honor veterans who died during the COVID lockdown, when memorial services were unable to be held.

Photo of the Day: A purple flower stands out among green leaves in front of a house on Maple Street. 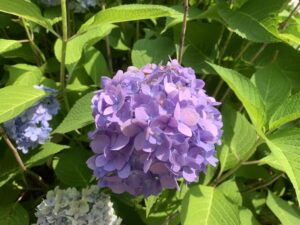