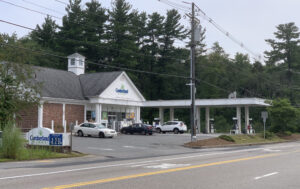 This area of West Main Street has seen numerous accidents — some serious — over the past few years. PHOTO/JERRY SPAR

At the Aug. 3 Select Board meeting, the board addressed an issue raised by a resident regarding a traffic issue at Cumberland Farms on West Main Street, where a number accidents — including some serious ones — have occurred.

Resident Darlene Hayes made a request — her second to the board — asking that a no left turn sign be installed at the exit from the convenience store and gas station at 91 West Main Street. The accidents often occur when a driver in the right lane of eastbound traffic stops to allow a driver exiting Cumberland Farms to make the left turn onto West Main Street westbound, but someone driving in the left lane of eastbound traffic does not see what is happening and collides with the exiting vehicle.

Town Manager Norman Khumalo recommended that the board authorize him to continue to evaluate how recent measures are working as well as “taking into account any other new information that the town may have now in defining a solution for this.”

Part of the problem is that the property is privately owned.

“It stands to be said that as a town we do not have an established process for handling these issues,” Khumalo said. “And I think that’s why we have to go through this protracted stakeholder negotiation process. Our opportunities to define measures that had been discussed as possible solutions to this issue usually come through our formal regular planning process. The proponent has not presented a plan here. This is a situation where I think we need to find a way to engage with the property owner, seek input from the public and hopefully come up with a good evaluation of what’s working given the adjustments that have been made, and also an evaluation of the other options that have come to light since the last option was implemented.”

Select Board Member Brendan Tedstone said it appears that the town might be at least partly responsible for the problem, as originally the road had one eastbound lane there, but a second lane was added for those making a left turn onto Lumber Street Extension.

“It’s unfortunate that we would put this back onto the business who’s done everything that they’re supposed to do, whereas the town created the hardship for them,” Tedstone said. “I would think it would leave us susceptible to a lawsuit if they were not in agreement with our proposals.”

Said Khumalo: “The town controls the right of way, and then there’s private property that abuts the private way. For any solution to work, the two need to work together.”

Hayes noted that there are no left turn signs at the two shopping plazas just up the road (UniBank/Starbucks and Bank of America/Dynasty) for vehicles exiting onto West Main Street.

She shared that her son was involved in an accident at the location, and she was told that his accident was one of many.

“It was my kid, he got hit really bad,” she said. “Since then, there’s been oodles. We’re up to over two dozen accidents there. And this is in less than two years.

“I’m going to keep pushing, because there was a sign not to take a left there at one point. … Now you’re looking at a huge second gas station compound going in across the street. There’s got to just be something that’s got to be better for public safety.”

Added Hayes: “That is a huge hangout for kids under 18 driving. They come in, they get their snacks, they get gas, they run around, they cut over to Starbucks. That is an accident for under-21s waiting to happen big-time. And a couple of them have been very bad accidents [involving] under 21-years-olds.”

Khumalo said he will continue to work on finding a solution that is agreeable for all parties, and the board expressed support.

“I think there are solutions that are certainly respectful of private property owners and businesses; we want to make sure we’re doing that,” Select Board Member Muriel Kramer said. “But safety is the No. 1 concern.”