Hopkinton public health nurse Kasey Mauro has announced that she is resigning, with her last day scheduled for June 4. In a message posted on her website, Mauro explained that when she took the job in late 2019 she was hoping to spend more time with her family. It did not work out that way.

The Conservation Commission heard a number of issues at its three-hour meeting on Tuesday, ranging from updates to the Chamberlain/Whalen project to trails creation. Several major items were continued to the meeting on May 25.

This week’s edition of the Police Log includes reports of two individuals being bitten by dogs, a person kneeling on a dog’s neck, and individuals putting a dog in the trunk of a car.

Hopkinton High School junior Kate Powers opened the spring outdoor track and field season by setting a school record with a throw of 140 feet in the discus during Tuesday’s meet against visiting Ashland. Powers also won the shot put to lead the Hillers to a 110-22 victory.

Photo of the Day: Hopkinton High School softball player Kristin McCluskey slides into third base during Monday’s 15-3 rout of Medfield. 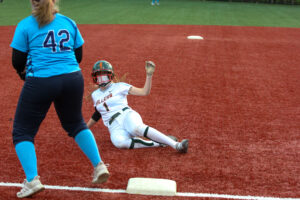