The Zoning Advisory Committee’s discussion on how to better control commercial ground-mounted solar developments took a turn Monday night, following input from town counsel. Attorney Bryan Bertram suggested a general bylaw, not specific to solar, that covers all types of developments in the town. Because while there has not been an appellate court decision on similar bylaws, he said, there have been indications that it would be difficult to defend.

The Hopkinton High School boys ice hockey team has had to adapt and roll with the changes during the COVID-19 pandemic. At one point, ice hockey was shut down in the state as cases of the virus began to rise. But with an abbreviated 2021 season having begun last week, coach Chris MacPherson said his team was ready to hit the ice safely, and competitively.

The Dover-Sherborn/Hopkinton girls ice hockey co-op will get a significant boost from several Hopkinton High School athletes this winter, especially on the defensive end of the ice. The program, which draws athletes from six schools, has six HHS players on the roster this winter, including senior captain Kristin McCluskey in goal.

Town meetings tonight include the Capital Improvement Committee (6), Housing Authority (6) and Board of Appeals (7).

Photo of the Day: Mercury, Jupiter and Saturn were visible at the same time Sunday night. 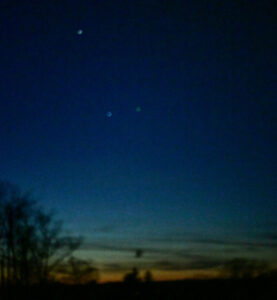 This stray very good boy greeting devotees as they leave the temple is exactly what I needed today..