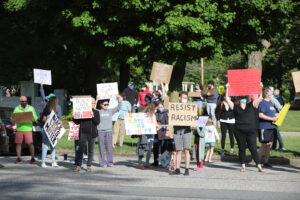 A vigil on the Town Common on Sunday drew about 200 people. PHOTO/JOHN CARDILLO

The Black Lives Matter movement had a presence in Hopkinton on Sunday evening, as about 200 individuals showed up to the Town Common to encourage respect for their fellow Americans.

What started out as a post on a local Facebook group inviting people to attend a one-hour “peaceful vigil” held “in solidarity with Black lives” gained a larger following as protests in cities and towns all over the country erupted over the weekend. The nationwide protests were triggered by last week’s death of George Floyd, an unarmed black man who died while being restrained by multiple Minneapolis police officers, including one who kept his knee on Floyd’s neck for about nine minutes dispute Floyd’s pleas that he could not breathe.

While some protests in big cities led to acts of violence and destruction, Hopkinton’s rally was subdued. Attendees stood on the edge of the Town Common facing Main Street and held up their signs, eliciting some encouragement from those who drove past. Hopkinton Police Officer Phil Powers was on hand to help manage the crowd.

At one point during the vigil an individual started a chant of “I can’t breathe,” and it lasted for about nine minutes, the amount of time Floyd had been restrained.

Resident Georgia Hall held a sign that read “What will we do to end oppression?”

“I think it was really heartfelt moment,” Hall said. “It was good to see the folks of Hopkinton come and support this very important issue. I was glad to be a part of it. We need to find ways to continue to help raise voices and be allies.”

Among those in attendance were state Rep. Carolyn Dykema and Hopkinton Select Board member Mary Jo LaFreniere.

The vigil lasted about an hour, although a handful of individuals stuck around longer into the evening and held up their signs on the corner of the common. 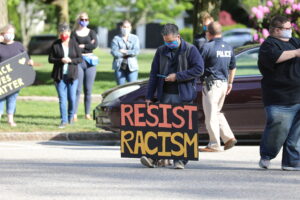 Some protesters brought their own signs, while organizers provided blank signs and markers for others to use. PHOTO/JOHN CARDILLO 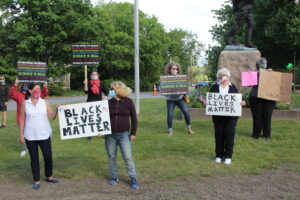 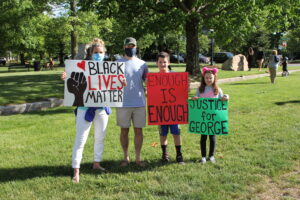 The Kirklands (from left), Stacie, Ryan, Jamie and Anne, made it a family affair. PHOTO/JOHN CARDILLO 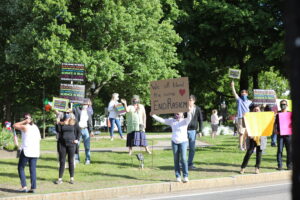 People made sure to socially distance while showing support. PHOTO/JOHN CARDILLO 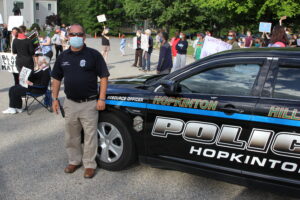 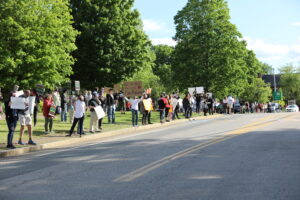 The crowd was peaceful throughout the vigil. PHOTO/JOHN CARDILLO 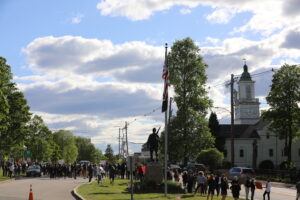 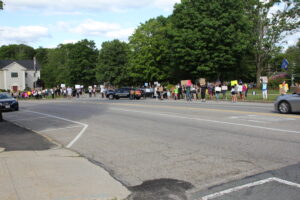