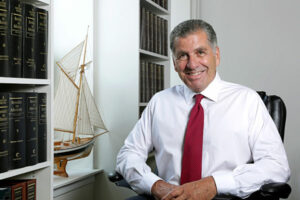 A Hopkinton resident and prominent Boston attorney has been elected vice president of the Massachusetts Bar Association.

Attorney Thomas M. Bond was chosen to serve for the 2019-20 year, starting Sept. 1. He said he was honored to be elected.

“I am going to enjoy the change to working to help bring everyone together,” he said.

The MBA is a nonprofit organization that serves the legal profession and the public by “promoting the administration of justice, legal education, professional excellence and respect for the law.” The MBA represents a diverse group of attorneys, judges and legal professionals across the commonwealth.

Bond is a founder and managing partner of the Kaplan/Bond Group in Boston. A trial lawyer and admiralty lawyer who has specialized in maritime and construction personal injury litigation for more than 30 years, Bond’s trial practice includes admiralty and maritime law, construction, product liability, automobile, personal injury and general liability. He has tried numerous cases and has argued or briefed more than 25 cases before various courts of appeal, including the U.S. Supreme Court, the U.S. Court of Appeals for the First Circuit, the Supreme Judicial Court, the Massachusetts Appeals Court, and the Supreme Courts of Connecticut and New Hampshire.

Outside the MBA, Bond is a member of the Massachusetts Academy of Trial Attorneys (MATA), where he has served on its Executive Committee and Board of Governors. He received MATA’s President’s Award in 2014. He also is a member of the American Association for Justice. A frequent lecturer on admiralty law at Suffolk University Law School, Bond has lectured locally at Massachusetts Continuing Legal Education, the Boston Bar Association and the New England School of Law, and nationally before the Tulane Admiralty Law Institute in New Orleans, the American Association for Justice and the American Trial Lawyers Association.

A resident of Hopkinton for the past 25 years, Bond has served the town on various boards including the Affordable Housing Task Force in the early 2000s when he was part of developing a bylaw on affordable housing in town. Bond was a member of the Elementary School Site Selection Committee in the late 1990s.

Bond said he and his wife Brenda chose to move to Hopkinton 25 years ago because of the “phenomenal” reputation of the school district.

“My [two] daughters went through elementary, middle, and high school here and the education they received in Hopkinton was better than any private school in Boston,” he said, crediting the school district and the taxpayers for their success today.