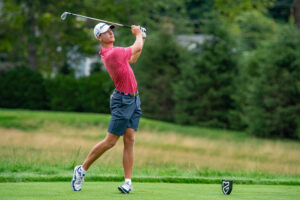 Jimmy Hervol hit the pro tour after a standout career at the University of Connecticut. PHOTO/DAVID COLT/MASS GOLF

There are times when Hopkinton’s Jimmy Hervol might feel like he is a world away from the PGA Tour. The 2015 HHS graduate is competing on the mini-tour known as Minor League Golf. The payouts are in the hundreds or, on a good week, in the thousands of dollars.

But then there are times when Hervol knows he can play with anyone in the world. One of those times occurred in a tournament in late January as Hervol fired a 60.

“It was definitely a fun round,” he said. “I just got it going early, made some putts in the first few holes, and before I knew it I was 11 under through 14 holes.”

How good is a 60? Tiger Woods has never shot one on the PGA Tour.

“Whenever you shoot a round that low, it validates that I can play on literally any tour in the world,” Hervol said. “There are pros who have had successful careers on the PGA Tour who have never shot that low. It’s huge for confidence, it’s huge for the belief factor.”

“If you don’t believe in yourself,” he added, “you’re just wasting time.”

Hervol turned pro after graduating from the University of Connecticut as one of the best players in the history of the program. The pandemic cut into his opportunities for competition last year. He spent the summer living in Hopkinton and mostly playing at Hopkinton Country Club. During the winter, he’s been in Palm Beach Gardens, Florida. This is his second winter playing competitive golf in the Sunshine State.

“I’ve been grinding away, it’s definitely a lot different than college golf,” Hervol said. “You’re on your own. There is no coach pushing you to practice, there are no teammates with you, so you have to discipline yourself as much as possible.”

The rewards on the mini-tours are not financial. Hervol said his hope is to break even and win enough to cover his expenses and earn back his entry fee. He has people supporting him, and he plans to pay them back if he makes it to the PGA Tour someday. His shorter-term goal is to earn status on one of the PGA-sanctioned tours, either in Canada or the Korn Ferry Tour — the PGA’s developmental tour.

Hervol’s hope is that he will be able to spend the summer playing in Canada on the Mackenzie Tour, the PGA Tour of Canada. Of course, his ability to play there will be determined not only by his ability but also the state of the ongoing pandemic.

In the meantime, Hervol is focusing on getting better. He said last year was a learning experience during which he figured out how much time he needed to spend playing as opposed to being on the practice green, the driving range or in the gym.

The grind is what makes performances like Hervol’s 60 all the more sweet. He entered that round tied for 23rd in the event at The Estate Course in West Palm Beach. That position put him squarely on the cut line. Hervol stepped to the 18th hole on the par-71 track at 12 under par. A par on the par-5 18th would have given him a 59, a number achieved just once in Minor League Golf Tour history.

Hervol said he “got a little excited” on the 18th and his tee shot ended up out of bounds. He hit a second tee shot — his third shot including a penalty — and made birdie with that ball, which left him with a bogey for the hole and a round of 60.

“It was one of those days where everything was clicking,” Hervol said. “I don’t want to call it easy, but everything just felt easy.”

Hervol is hoping to become the next big Hopkinton name in professional golf. Jon Curran is playing on the same mini-tour, Hervol said, though he has yet to connect with the player from his same hometown. Just days after Hervol’s 60, Hopkinton High graduate Keegan Bradley was near the top of the leaderboard at the PGA’s Waste Management Open in Arizona.

“They both played professionally, so they get it,” Hervol said. “It’s still the same game, and I am lucky to have a great support system.”