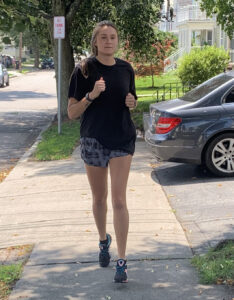 Before Johanna Impellizeri runs the Boston Marathon, she will continue to run a $5,000 fundraiser for the Hopkinton Garden Club, a group whose work will not be as visible during this year’s race.

The area around the Boston Marathon starting line is part of the Main Street Corridor Project, an endeavor meant to improve public safety along Route 135. But this also dismantled three of the Hopkinton Garden Club’s gardens in the area.

Replacing those gardens with new ones will require funds once the multiyear construction project has concluded. The nonprofit also plans to host more horticulture-themed events and provide more scholarships for horticulture students. HGC has yet to coordinate an official meeting on the topic of restoring its downtown gardens.

“They had mentioned early on that they were working on a big construction effort in the middle of town,” Impellizeri said “Then they were going to work with the community to revamp it and upgrade it, make it look beautiful again. … I’m sure whatever they put together is going to be amazing.”

HGC receives a Boston Marathon bib each year to use as a fundraiser. Impellizeri received the bib this year to run the 125th Boston Marathon and help the HGC raise funds for its work (click here for her fundraising page).

HGC commits to “beautifying” the town by installing and maintaining plantings, working with organizations like the Hopkinton Senior Center and Hopkinton Center for the Arts, and hosting educational speaking presentations.

“They do a great job in Hopkinton,” Impellizeri said. “That kind of hit me and made me feel like I was actually helping a good group. Now, I’m trying my best to get them [to their goal].”

Regarding the race, Impellizeri said toward the end of summer that she felt in good shape, though she has been struggling to overcome a lingering back injury.

“That is something that I’ve kind of dealt with my whole life,” the 26-year-old Impellizeri said. “It’s not necessarily because of the running or anything, so I’m just working on some [physical therapy in late August], and then I’m really going to get back into it. But so far, I’m feeling good about it.”

The buzz surrounding the Boston Marathon caught Impellizeri’s attention during her time at Assumption University in Worcester, where she played basketball. She attended the race a few times before graduating, describing it as an electric environment.

A native of Seaford, New York, Impellizeri originally intended to participate in a half-marathon this year in preparation for next year’s Boston Marathon. Hearing about the Garden Club’s yearly bid for a runner changed her mind.

Impellizeri trained for and ran a 10K (6.2-mile) race in 2018. This and an extensive background in sports have helped her prepare for the big race.

She has been sticking to a tough training regimen in preparation for Oct. 11. This has included joining a group of friends a few times a week for runs. Having running partners has helped hold Impellizeri accountable to a strict but overall rewarding schedule.

“I was never a long-distance runner, and I’m still not,” Impellizeri said. “I’m working on it. But the basketball part of my athletic career kind of helped me get a little boost because I was already used to doing some running.”

The Boston Marathon ranks as the oldest active marathon in the world and one of the most popular. Millions of people each year watch the race live or on TV, and thousands journey to Hopkinton to watch the runners take off.

Impellizeri said she will not consider herself a runner until after completing the marathon. She sees the race as an incredibly hard but exciting challenge for the human body.

“One of the things I had to learn after college was how to get back into fitness and working out, and it’s in a different capacity than college sports,” she said. “I found that just going for a run as slow as I wanted, stopping if I wanted to, was really relaxing. Not many people use relaxing as a word to describe running. But for me, it was definitely a good outlet.”

Impellizeri said she remains open to participating in more fundraisers like this one for the 90-year-old Hopkinton Garden Club, which reached its largest size ever during the pandemic.

“I think now is the right time because everything that’s gone on in the past year or so with the pandemic has been really hard for a lot of people,” Impellizeri said. “It’s been really hard on me, and I think just giving myself something new to focus on — a new goal, a new schedule — has been very helpful to get me out of the house and into the outside world where it’s a little bit safer.

“I think it’s going to be a really exciting day to get the community back out there in a safer environment,” she added. “Hopefully we’re making strides towards the pandemic being gone and finished.”