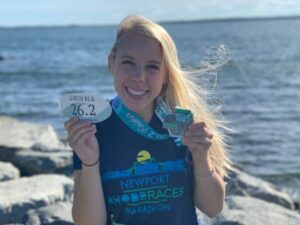 Hopkinton’s Morgan Woodman has found that exercise — including marathon training — has helped her deal with health issues.

Morgan Woodman has had to endure more challenges than the typical avid athlete. She has struggled with stomach issues since she was a sixth-grader in Hopkinton, and over the years has endured severe bloating, vomiting, bleeding, pain and a substantially compromised immune system.

But Woodman, 24, has not been one to let her health slow her down, and she’s taking that same spirit into running her first Boston Marathon this year.

“Exercise has always been a big factor in helping me feel so much better,” Woodman said. “It’s a challenge, but this training has done so much for me and improved my health so much. It makes me a better runner because I push myself and I don’t want to let anything stop me.”

During her training, some days have been harder than others. Woodman has dealt with soreness and joint pain and is more prone to arthritis than the average runner.

“I put in a lot more time stretching and icing and doing what I need to do, but some days I still wake up and my run is really slow,” she said. “I think it’s a mental battle, which running a marathon is in general.”

Health is a big part of Woodman’s life. She writes a blog with healthy recipes and lifestyle tips and works as a cancer researcher at Brown University and Women & Infants Hospital in Providence.

Running Boston is something she has always wanted to do. Her father, James, has been a longtime volunteer at the start line in Hopkinton and she said she’s loved seeing her hometown double in size every Patriots’ Day when the tens of thousands of runners, volunteers and spectators make their way in.

“This is like a dream come true,” Woodman said. “I have never really been a long distance runner so this is new to me, but I’m really excited.”

Woodman ran track at Hopkinton High School but focused mostly on hurdles and sprinting. She ran her first marathon last year, the Newport Marathon, which ended up taking place in a virtual format due to the pandemic. So Woodman considers this her first “real” marathon.

She is running for the Friends of Hopkinton (gofundme.com/f/morgans-marathon-mission), supporting their efforts to provide community activities to foster town spirit and pride. It’s a cause near and dear to her.

“Family is really important to me, I grew up with a big family, and one thing everyone in Hopkinton has in common is living in this community, I think it’s really important,” Woodman said. “It’s good to be able to go to an event and have a good time with other people who are part of our town.”

Woodman said she was approached by a friend whose parents are involved with Friends of Hopkinton.

“She reached out because she knows how much I have always wanted to run Boston,” Woodman said. “The more she told me about this group, the more excited I was to run for them. I like their mission and what they stand for.”

Although Woodman is looking forward to crossing the finish line in Boston, the start in her hometown may end up being the highlight.